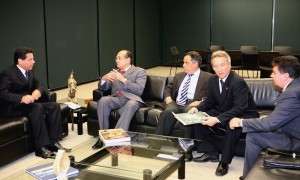 UPDATE May 10, 2013 – Pressure against the asbestos industry continues with a Brazilian Senator, Congressman, and Governor under fire http://bit.ly/KK6G0q

“They are Senator Demosthenes Torres (DEM-GO, until April 4), Congressman Carlos Alberto Leréia (PDSB-GO) and the governor Marconi Perillo (PSDB-GO).The three are part of the “bench of chrysotile.” They are legislators who, in exchange for defending the fiber carcinogen in parliament, supported financially by the asbestos industry in their campaigns. Chrysotile or white asbestos, is the existing type and still allowed in the country.”

This morning, May 8th, an article was brought to us by our ADAO friend and Brazilian anti-asbestos advocate, Fernanda Giannasi, about the current state of the asbestos industry in Brazil. Corruption has run rampant as industry officials have worked for years with members of Parliament in their pocket, but now it finally seems that things are being done to put a stop to this. I encourage you to read the article for yourself, and learn about asbestos abroad. I recommend using opening the article in Google Chrome, as it will automatically translate from Portuguese to English, or by using one of the many free translation sites available online. The article can be read in its entirety, here: http://www.viomundo.com.br/denuncias/operacao-monte-carlo-atinge-em-cheio-lobby-parlamentar-do-amianto-perillo-demostenes-e-lereia.html.

Fernanda had this to say about the article: “The closing of the most influential asbestos lobby – the Chrysotile Institute in Canada – and the denouncement of the involvement of the so called “Chrysotile Parliamentary Team” at the National Congress with big shots arrested in one of the most important police operation in the last years to combat illegal gambling games, corruption, money laundering and traffic of influence in the millionaire business of governmental constructions, is the coup de grâce for the asbestos industry. After this, it will be very difficult to the asbestos lobbysts speak out again or  present themselves publicly as they have done all these years to defend the indefensible asbestos”

Thanks again to Fernanda Gianassi for bringing this article to our attention!