EPA, We Will See You in Court. 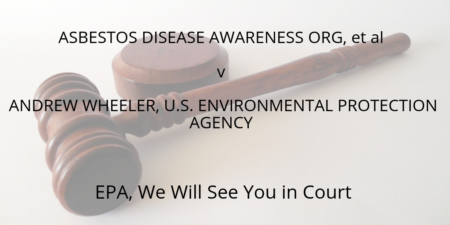 On February 18, the Asbestos Disease and Awareness Organization (ADAO), along with the American Public Health Association, Center for Environmental Health, Environmental Working Group, Environmental Health Strategy Center, and Safer Chemicals Healthy Families, filed suit  against the Environmental Protection Agency (EPA) to challenge its denial of our petition to require industry to file “Right to Know” reports on asbestos.

Nearly six months later, it’s worth pausing to review where our case stands and to reemphasize what’s at stake.

Our September 25, 2018 petition under the Toxic Substances Control Act (TSCA) was a response to the remarkable lack of any reporting requirements on asbestos. In the petition, we told EPA that its failure to require  reporting “has resulted in a troubling – and wholly avoidable – lack of reliable information about who is importing asbestos and in what quantities, where and how asbestos is being used in the US, and who is being exposed and how that exposure is occurring.” Because of the lack of reporting, we emphasized, “the public is  not adequately informed about the risks that asbestos presents to health in the US, and EPA itself lacks the basic information required for a complete and informed risk evaluation that assures that unsafe asbestos uses are removed from commerce.”

While we weren’t surprised that the Trump EPA denied our petition, we were disappointed that it refused to take the simple, responsible, common-sense  step of finding out who is importing and using this dangerous substance and how Americans are exposed. Because reporting is essential to effective public health protection under TSCA, we couldn’t sit on our hands so we sued EPA to get a court to compel it to do the right thing.

We are not alone in this fight. Attorney Generals from 17 states and the District of Columbia also petitioned EPA to require asbestos reporting under TSCA and, when their petition was also denied,  several of the AGs filed suit against EPA on June 26. Both cases have now been assigned to Judge Chen in the District Court for the Northern District of California. As a result, we will be partnering with the states as the cases move forward.

On May 24, EPA filed a partial motion to dismiss our case. We believe EPA’s position is wrong and we filed a strong response on July 19. The issues involve the laws under which EPA’s denial of our petition will be reviewed by the court and won’t make or break our case. But we’re serious about standing our ground and committed to seeing the case through. Just as we’re fighting this ill-founded motion, we intend to oppose EPA at every turn as the case goes forward.

Our push for asbestos reporting is part of a bigger fight to hold EPA accountable and remove asbestos from commerce.

Asbestos is among the most dangerous minerals ever mined and/or used and is responsible for nearly 40,000 American deaths every year. Despite public misconceptions, the Centers for Disease Control emphasizes that asbestos is a present-day threat, as it is “still found in many residential and commercial settings and continue to pose a health risk to workers and others.”

Our Right to Know lawsuit would not be necessary if the EPA had been able to successfully ban asbestos when they tried in 1989. But two years later, the asbestos industry successfully  challenged the EPA in court. Profits won over public health and the ban was overturned. Since then, nearly 70 other countries have banned asbestos while in America, more than one million citizens have died from preventable asbestos-caused diseases and an estimated 375,000 metric tons of asbestos has been imported into the country.

This past winter, 17 EPA agency whistleblowers leaked internal emails to our organization. The documents revealed that Agency leadership was acting against the advice of their career scientists and lawyers with regard to asbestos policy. The documents, which agency leadership has ignored, call for an outright asbestos ban

As our legal fight continues, the ADAO will continue to push for an all-out ban, no exceptions, through the bicameral Alan Reinstein Ban Asbestos Now Act of 2019 (ARBAN), which currently has over 50 cosponsors and has been endorsed by 17 states and the District of Columbia. It includes a provision calling for increased asbestos reporting, along with a ban on all asbestos imports and use within the U.S.

Americans have the right to knowledge that will protect them and their families. That is why ADAO will not back down as we continue our legal and legislative push to ban asbestos once and for all. The time is now.