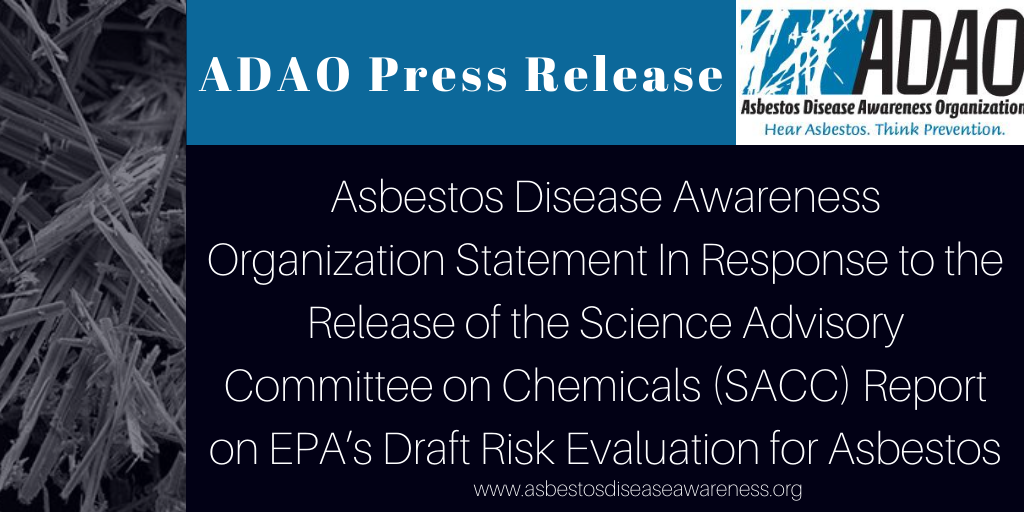 “As the SACC reported, ‘Overall, EPA’s environmental and human health risk evaluations for asbestos were not considered adequate and resulted in low confidence in the conclusions. This is due to missing data for environmental exposures, coupled with the fact that current estimates for human health risk are created for a narrow group of workers and consumer users based on limited exposure to chrysotile asbestos fibers leading to numerous uncertainties.’

“Four years ago, when President Barack Obama signed the Frank R. Lautenberg Chemical Safety for the 21st Century Act, we had hoped EPA would finally be able to protect Americans and ban asbestos once and for all. However, EPA has failed to rise to the challenge of using the new tools in the amended law to address the dangers of asbestos that have been well-documented for decades.

“Because of this failure, the next steps under TSCA will take years to complete. In the meantime, asbestos will remain in homes, schools, and workplaces; as well as on consumer shelves. Through all this, Americans will continue to be at risk from asbestos-caused diseases.

“The U.S. needs an asbestos ban without any loopholes or exemptions.

“We urge Congress to pass the Alan Reinstein Ban Asbestos Now (ARBAN) Act of 2019, a bill that would ban all asbestos imports and use within the first year of enactment, would provide Americans with the right to know where asbestos is imported and used, and would study legacy asbestos found in structures.”