Next week, ADAO will be attending the American Industrial Hygiene Association (AIHA) 2019 AIHce EXP Conference and Exposition. The conference, which will be held in Minneapolis, MN, on May 20-22, brings together public health groups and advocates in order to advance worker health and safety.

The event will feature a screening of the asbestos documentary Dirty Laundry, which spotlights the difficulties and sorrow that families face when they are confronted with a mesothelioma diagnosis. Directed by cousins Conor Lewis and Zack Johnson, the documentary follows the pair as they set out on a cross-country bike ride with a camera crew and a mission: to gather information on the deadly disease known as mesothelioma which killed their grandmother, along with thousands of other Americans. 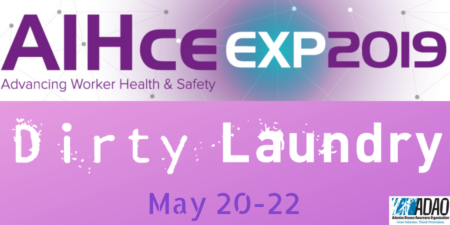 When ADAO asked Conor and Zack what they hoped to accomplish with their film, they said, “Our goal at the outset was to make a true and honest film about this problem, told through the lens of our family. Ultimately we wanted to tell this story to a whole new generation of home renovators and future change-makers.”

From California to New York, Conor and Zack interviewed surviving family members, doctors, activists and members of communities to reveal the stark reality of corporate disregard for public health or the environment.

“Every year for the past five years, the AIHA Social Concerns Committee has shown a documentary at the American Industrial Hygiene Conference and Exposition (AIHce) to highlight critical issues related to worker or environmental health and safety,” said Scott Schneider, the retired director of Occupational Safety and Health for the Laborers’ Health and Safety Fund of North America. “This year we are showing Dirty Laundry to bring attention to the continuing problem of asbestos-related disease in America. We hope to shine a light on this problem and thus encourage the AIHA to take a stance in support of the Alan Reinstein Ban Asbestos Now bill currently before Congress and against the new EPA Significant New Use Rule (SNUR) for asbestos. The documentary shows we still have a long way to go to address the problem of asbestos in America.”

During the conference, the film will be shown on Tuesday, May 21 from 2:00-3:00 pm at the Minneapolis Convention Center in room 200B. Following the screening, there will be a panel discussion from 3:00 – 4:00 pm where Conor and I will answer questions from the audience.

We look forward to being a part of this great conference and advancing an asbestos ban in order to protect public health.

Please join me in congratulating Scott Schneider who will be recognized with the 2019 AIHA Social Responsibility Award. For decades, Scott has be a tireless advocate and leader for occupational safety, health, prevention, and policy.

Through a combination of art, advocacy, education, and community, we can make change happen.