Skip to content
Home/Blog/“Asbestos: My War with the Devil’s Dust” a New Book by Eric Jonckheere, Extraordinary Anti-Asbestos Activist

“Asbestos: My War with the Devil’s Dust” a New Book by Eric Jonckheere, Extraordinary Anti-Asbestos Activist 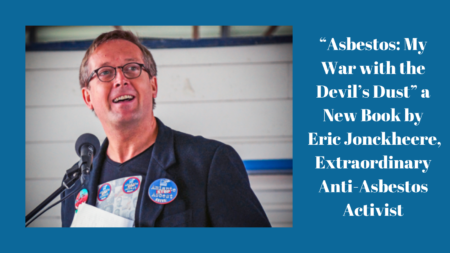 We are pleased to celebrate today’s release of anti-asbestos advocate, Eric Jonckheere’s new book entitled, “Asbestos: My War with the Devil’s Dust”. Eric is a passionate warrior for justice who has been at the forefront of the international movement to ban the production, trade, and use of asbestos for years.

The book delves into the lives of Eric and his family, tragically altered by the use and production of asbestos in his hometown of Kapelle, Brussels. He bravely writes from the heart while detailing a chilling story of corruption, deceit, and murder. Eric’s father, Pierre, and brother, Jacques, both worked at the Belgian multinational Eternit Asbestos Factory. After years of dedicated work, Pierre contracted mesothelioma and died in 1987, not knowing that the rest of the family had also been heavily exposed to and contaminated by asbestos. Following the loss of her husband, Eric’s mother would refuse a 40,000 € settlement offer from Eternit, which would have forced her to remain quiet about her family’s asbestos exposure. Instead, she chose to speak out. Not long after losing their father, Eric’s mother and two brothers also contracted asbestos-caused diseases and sadly passed away.

Because environmental exposure to the killer dust claimed the lives of his parents and two brothers, Eric is unrelenting in his dedication to ending the man-made asbestos disaster. His memoir is a timeless and impactful call for international action against asbestos.

International asbestos expert, Barry Castleman, ScD, shared, “Eric Jonckheere’s family story is a story that must be told. It stands in stark contrast to assurances by merchants of death who speak about ‘controlled use’ of asbestos.”

In 2018, during the Asbestos Awareness & Prevention Conference in Washington D.C., Eric was recognized for his exceptional advocacy work to ban asbestos by receiving the ADAO Alan Reinstein Memorial Award. Today, Eric is not only a pilot, author and activist, but also serves as the President of the Asbestos Belgium Victims Association (ABEVA).

To learn more about Eric’s story, watch ABEVA’s latest video depicting the lives of many victims from Eternit’s asbestos operations near the Belgian cities of Kapelle and Harmignies.

The book, “Asbestos: My War with the Devil’s Dust,” can be purchased by contacting Eric Jonkheere at jonckair@yahoo.com.

Congratulations, Eric. You have changed the world for the better, forever.