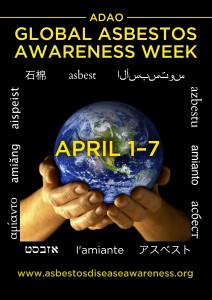 Asbestos: One Word. One World. One Week.

Thanks to the U.S. Senate, ADAO now has Senate Resolution 336 designating April 1 -7, 2014 as “Asbestos Awareness Week.”  We are proud to have reached the milestone of our tenth year coordinating this event with our collaborators around the world.  Global Asbestos Awareness Week (GAAW) begins on Tuesday with ADAO’s exclusive online candlelight vigil to honor for those fighting preventable asbestos-caused diseases and remember those we have lost. Our GAAW campaign will include “7 Facts for 7 Days” featuring blog from experts such as Dr. Richard Lemen, Dr. Arthur Frank, Dr. Ken Takahashi, and others. During GAAW, will embrace technology, social networks and mixed media so that our reach truly extends worldwide.

Asbestos is a known carcinogen and there is no safe level of exposure.  The World Health Organization reported:

The USA must stop importing asbestos and pass legislation to ban asbestos.  We all know – asbestos kills. Tweet, post, and share #BanAsbestosNow! We sincerely hope that you will join us in collaboration and action during Global Asbestos Awareness Week.

ADAO will post the full schedule and hosts on or before March 15, 2014.