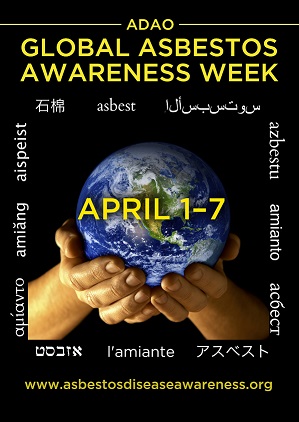 Asbestos: One Word. One World. One Week.

Thanks to the U.S. Senate, ADAO now has Senate Resolution 66 designating April 1 -7, 2013 as “Asbestos Awareness Week.”   Global Asbestos Awareness Week (GAAW) begins on Monday with ADAO’s exclusive online candlelight vigil to honor for those fighting preventable asbestos-caused diseases and remember those we have lost. Our GAAW campaign will include “7 Facts for 7 Days” and a different asbestos subject each day.

Asbestos is a known carcinogen and there is no safe level of exposure.  The World Health Organization reported:

April 1: Linda Reinstein, “7 Facts for 7 Days” and open with Candlelight Vigil to honor the Warriors fighting asbestos disease and remember those we have lost.

April 2: Dr. Richard Lemen, “Asbestos: What Is It?” ADAO Science Advisory Board Co-Chair explains where asbestos is found and who might be in danger of being exposed.

April 3: Dr. Arthur Frank, “Why Is Asbestos Bad for My Health?” ADAO Science Advisory Board Co-Chair shares information about what you should do if you are diagnosed with an asbestos-related disease.

Janelle’s Story, “I Will Never Be the Same Again”

April 5: Renae Desai and Linda Reinstein “Share Your Story: The Power of Community”

Louise’s Story, “I Will Not Die in Vain”

Debbie’s Story, “Mesothelioma and Me”

Posted on April 7: Linda Reinstein, “Taking Education to the Digital Streets every Sunday for #BanAsbestosNow Action” and close with Candlelight Vigil to honor the Warriors fighting asbestos disease and remember those we have lost, as we finish Global Asbestos Awareness Week in unity.

Alan Reinstein’s Story, “I’ll Do Anything to Fight Mesothelioma to Have More Time with My Family, Anything”