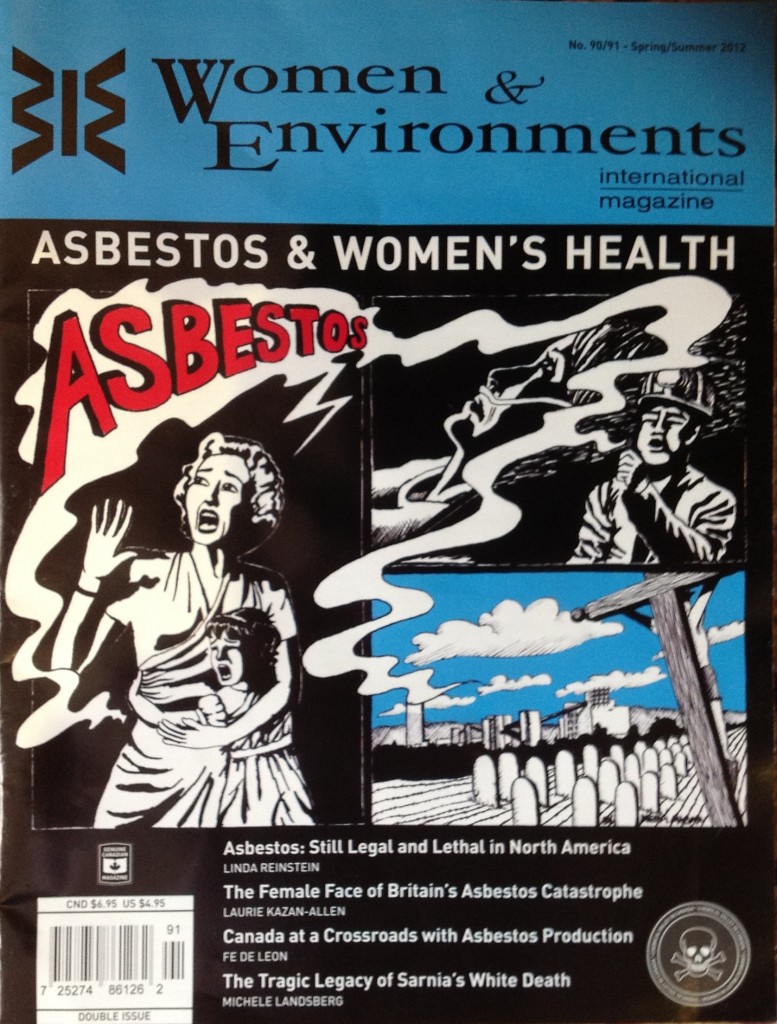 ADAO was recently asked to write an article for the Women and Environments International (WEI) Magazine’s Spring/Summer 2012 edition “Asbestos & Women’s Health.” This incredibly informative publication – which includes contributions from Olga Speranskaya, Laurie Kazan-Allen, Alexandra Caterbow, Fe de Leon, Kathleen Ruff, and many other experts and advocates in the field – focuses on the effects of asbestos exposure that fall disproportionately on women’s shoulders and attempts to increase awareness to prevent environmental and occupational asbestos-caused diseases.

ADAO is extremely honored to have been asked to contribute to this edition and considers it an excellent opportunity to advance the global asbestos ban struggle. Currently, asbestos is still mined in Russia, China, Brazil, Kazakhstan, and Canada, and only 55 countries have a ban. It is reprehensible that the U.S. and Canada have not banned asbestos, and this practice must be stopped.  ~Linda

The Women and Environments International Magazine: “Asbestos and Women’s Health”

What you can’t see can be deadly: virtually invisible, yet absolutely lethal asbestos fibers claim nearly 300 lives every day from environmental or occupational asbestos-related disease.

For more than a century, scientific studies have confirmed that asbestos exposure causes fatal diseases. Irrespective of human rights, the North American asbestos industry continues to criminally expose people to asbestos in pursuit of profits. The World Health Organization, International Labor Organization, U.S. Environmental Protection Agency and Surgeon General all agree: asbestos is a human carcinogen, and there is no safe level of exposure. All forms of asbestos can cause mesothelioma and lung, gastrointestinal, laryngeal, and ovarian cancers, as well as non-malignant lung and pleural disorders.

Nine years ago my life seemed perfect, but the best laid plans of mice and men often go awry. I was a PTA and classroom Mom, loving life, community, and blissfully dreaming about my family’s future. However, in 2003, my life took a sharp turn in an ill-fated direction, one that too many have traveled down. Alan, my husband of 20 years, had developed a slight, persistent cough, and had also lost some weight.  Intuitively, I thought something was wrong. During Alan’s routine physical, an x-ray revealed a pleural effusion – fluid between the lining of the lung and the lung itself.  I quickly found in my steep climb on the mountain of doom that “what you don’t know can’t hurt you” could not be further from the truth. Alan suffered through a glut of tests to determine what was causing the effusion.  For nearly one year, every test was negative, but Alan’s breathing and cough worsened and Alan underwent surgery for an idiopathic condition. When the thoracic met with me to discuss the surgical procedure, he asked if I was alone, my heart stopped. He told me that Alan had mesothelioma, a cancer only caused from asbestos.  Of course, just like every other newly diagnosed person, I had never heard of mesothelioma, I couldn’t pronounce the word, and worst of all, I learned it was incurable.

From Magic Mineral to Deadly Dust.

Faced with the death of her husband, what is a wife to do?  Feelings of grief, isolation, and anger ran rampantly through my core.   Watching Alan change before my eyes was unbearable. Falling from the vibrant, active father and husband, Alan had forever changed, and so had we.  Medical treatment is not the only facet of care needed in such grave situations; there is a second wave of care needed for the family.  For families, patient care causes financial, emotional, and psychosocial devastation.  Sharing my inner secrets of bewilderment, fear, exhaustion, and depression are common.  Alan survived his extra-pleural pneumonectomy surgery, which removed a rib, his entire left lung, pericardium, and replaced his diaphragm. As he began to trust his body and to live with only one lung, we began to heal as a family.  This is where the journey could have ended, but for the Reinsteins, it did not. I continued to read and learn that asbestos has caused the largest manmade public health disaster. Hollywood couldn’t write this screenplay – asbestos – the crime of a century with its historical facts and players read like a Grisham novel. Something else became glaringly apparent – nothing was being done to prevent exposure. But what is a family of three going to be able to accomplish? What did we even want to accomplish? We wondered how many other people were even aware that asbestos was a problem.

Is it my maternal instinct, hopeless optimism, or anger that fuels my action and yours? Maybe it’s all three.  As a mother, what could be more horrific than burying your husband?   In unison, our voice reverberates the inconvertible truth: asbestos kills, and it must be banned.

A year passed after Alan’s surgery, when my daughter Emily told me, “Mom, I want my senators to know how hard it is for a girl who is just 11 to watch her dad suffer.” That was all I needed to hear, and I jumped at the opportunity to make a difference in raising awareness on the harms of asbestos; as Wayne Gretzky said, “You miss 100% of the shots you don’t take.” This was a shot not just for Alan, or for our family, but for the thousands of Alans and families around the country. I didn’t know then how much our lives would change from the first of what would be many trips to our nation’s Capitol. While in DC, I met others with similar stories of how asbestos sickened, or killed their loved one. I wasn’t trying to do reconnaissance, but I quickly realized that these diseases were not rare, just under-reported. So what are we, as North Americans, to do?

Together change is possible.

In 2004, I co-founded the Asbestos Disease Awareness Organization (ADAO) with Doug Larkin to serve as the voice of victims, to educate the public about the dangers of asbestos, and to ban the use of asbestos.

Alan’s courageous three-year mesothelioma battle ended with Emily and me by his side. As we held Alan’s hands, we watched him until he took his last breath, until the heart monitor flat lined. I remember the moment like it was yesterday: Emily comforting her father, telling him he was a champ, that he won because he never gave up.  As many of you know, parents will do anything for their children, and Alan’s gift of more time was the most precious gift ever. When I testify in Congress, I hold back my tears when I say from my heart, “For each life lost, a shattered family is left behind.”  Echoing in my head and heart – was the ultimate question – should we cease to seek change? But we had promised Alan that we would not give up, and I continued the battle, albeit at a glacially slow pace, to end the deadly legacy of environmental and occupational asbestos-caused diseases.

From Magic Mineral to Deadly Dust.

Decades of science have proven that all six types of asbestos fibers – chrysotile, amosite, crocidolite, tremolite, anthophyllite, and actinolite – are carcinogenic. This lethal mineral has only been banned in 55 countries – the United States and Canada are not among them.  Many countries still use, import, and export asbestos and asbestos-containing products; chrysotile accounts for more than 95% of all the asbestos used globally, and almost all of the chrysotile the US imports, comes from Canada. Despite the industry’s disingenuous assertions, asbestos, including chrysotile, is a proven human carcinogen and there is “no controlled safe use”.  The nearly invisible asbestos fibers  can be 700 times smaller than human hair, and remain suspended in the air for days.

The World Health Organization (WHO) states, “The most efficient way to eliminate asbestos-related diseases is to stop using all types of asbestos.” An estimated 107,000 workers die annually from asbestos-caused diseases such as lung cancer, mesothelioma, and asbestosis. Workers’ exposure doesn’t stop at the site; one can follow the trail of toxic dust home. It is no longer just workers who are at risk; it’s also their families, children who hug parents wearing contaminated clothing home from work, and spouses who wash those clothes. The asbestos victim’s profile has changed, once a blue-collar worker in his mid-sixties, there is a new patient profile emerging. Tragically, it is becoming more and more common to find women in their 50s being diagnosed with mesothelioma. The new patient profile presents frightening evidence that environmental exposure is lethal.

Asbestos knows no boundaries; nor do the fibers discriminate.

Asbestos has been widely used in building and construction in the United States and an estimated 35 million homes are contaminated with asbestos-tainted insulation called Zonolite. Offices, hospitals, schools, and extensive underground infrastructures including water systems and subways can be contaminated. Also renovations, deconstructions, and disasters can release fibers; this is particularly dangerous, because such events can spread fibers throughout the environment of a community. Worse yet, the United States Geological Survey reported, “The United States is dependent on imports to meet manufacturing needs” and that “roofing products were estimated to account for about 60 percent of U.S. asbestos consumption.”

Construction workers were found to be 11 times more likely to develop mesothelioma.

In the United States, the Occupational Safety and Health Administration states, “Asbestos is well recognized as a health hazard and is highly regulated. An estimated 1.3 million employees in the construction and general industry face significant asbestos exposure on the job.”  In May 2010, the President’s Cancer Panel (PCP) in America released the landmark 200-page report titled “Reducing Environmental Cancer Risk:  What We Can Do Now.”  Environmental and occupational cancers are on agency radars now more than ever before. More than 90 percent of the asbestos used worldwide today is used in the manufacturing of asbestos-cement sheets and pipes.

To change public policy in Manhattan Beach, California or the nation, you need to have a voice to drive your work forward. Social media advocacy has changed the landscape of anti-asbestos campaigns and fostered unity.  We are no longer isolated, muted, and silenced, instead, we, as one world support national and international campaigns. Social networking platforms such as Facebook allow us to connect and share within seconds. Sharing our stories has enabled asbestos victims to unite around the world and embrace solidarity to raise asbestos to change public policy. Since 2004, ADAO has grown leaps and bounds over the last eight years; with an international support network over 20,000 strong, it has become the largest independent asbestos victims’ organization in the United States.

History is a great teacher to those who listen.

In February 2012, a historic criminal verdict from the Italian Eternit asbestos trial in Italy definitively reaffirms a century of scientific evidence that asbestos exposure is deadly. Tried in absentia, billionaire Stephan Schmidheiny and Baron Jean-Louis de Cartier de Marchienne were found guilty of asbestos crimes of knowingly and willfully exposing Eternit workers and communities and for creating an asbestos environmental disaster, particularly in Casale Monferrato and its surrounding areas; each was sentenced to 16 years in prison and has been ordered to pay millions of euros in damages. A new precedent has been set: corporations involved in the production of asbestos will be held accountable for human, social, and environmental rights violations.

One life lost to a preventable asbestos-caused disease is tragic; hundreds of thousands of lives shattered is unconscionable.

It is abundantly clear in my daily work that the pervasive lack of knowledge regarding the threat of asbestos is common, and the asbestos industry tries hard to keep it that way.  Be an advocate, be heard and support change.  As an accidental activist, I have learned to embrace the unknown; take the first step toward seeking change, because change can start with one voice. I love and live by Margaret Meade’s quote: “Never underestimate the power of a small group of committed people to change the world. In fact, it is the only thing that ever has.”