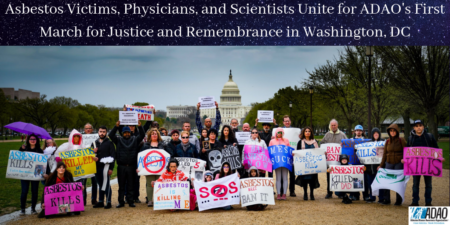 Through the streaming rain and a cold Washington D.C. morning, asbestos victims, physicians, and scientists took to the streets on March 5 for the first-ever March for Justice and Remembrance. Organized in conjunction with ADAO’s annual 15th Annual International Asbestos Awareness and Prevention Conference, as well as Day Five of Global Asbestos Awareness Week, the March delivered a strong message to lawmakers: it’s time to ban this carcinogen once and for all.

One of the most powerful messages during the March was Raeleen’s painful and far too common message of “Asbestos is killing me.”

In total, nearly 50 people joined in the demonstration, including doctors, cancer patients, Mesothelioma Warriors, and academic professionals of all types. Daniel Lambo, director of the acclaimed asbestos documentary Breathless was among the group, in addition to ADAO Co-Founder Linda Reinstein.

Although many of the participants were affiliated with ADAO and its conference, some were not. The event brought together stakeholders of many kinds, all with the common goal of ridding the United States of the man-made disaster of asbestos.

ADAO has always operated by the maxim “where knowledge and action unite,” and it’s possible that this has never been better embodied than during the March. In a peaceful act of civil disobedience, a group of asbestos experts delivered the facts on this carcinogen to the entire world, in front of some of the most powerful public officials on Earth. These courageous citizens communicated the entirety of the ban asbestos message: the human toll, the scientific condemnation, the need for immediate action, and more. 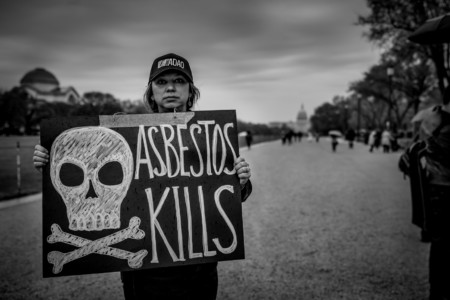 As a loud voice for an asbestos ban and a cure, Mesothelioma Warrior, Julie, somberly carried her“Asbestos Kills” hand-made sign.

As all of these advocates already know, however, the work doesn’t end after one successful march. ADAO and other public health groups are pushing the Alan Reinstein Ban Asbestos Now Act through Congress at this very moment, but we need continued support to succeed.

For all who participated in the March for Justice and Remembrance, the next step is to send your congresspeople a message with your photos from the demonstration. Our personal stories are our most powerful tool to create change. Let’s tell Washington what the March meant to us, and why  we want asbestos to be banned.

For all who couldn’t join the march, you can still call and write your congresspeople. Tell them why you want them to ban asbestos and why we must act now. You can also sign ADAO’s petition to ban asbestos now without any loopholes or exemptions.

The ban asbestos champions at the March for Justice and Remembrance have provided a clear boost of momentum to our movement. Now is the time to capitalize on this energy and make sure that lawmakers know how the public feels: asbestos should be banned once and for all.

Special thanks to Earl Dotter and Tony Rich for the March photographs.