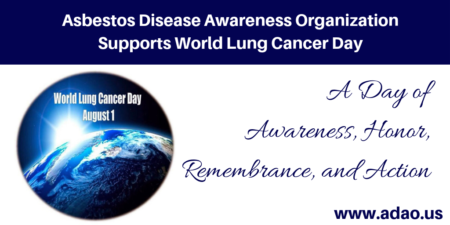 According to the World Health Organization (WHO), cancer is responsible for nearly one in six deaths globally. Lung cancer is the most common cancer worldwide, claiming more lives yearly than breast, colon, and prostate cancers combined. It accounted for 2.09 million new cases in 2018.

Each year, an estimated 34,000 Americans die from preventable asbestos-caused lung cancer, yet imports and use continue. ADAO’s research reveals that an estimated 23% of lung cancer deaths may be caused from asbestos exposure.

According to the American Cancer Society, the top three 2019 lung cancer facts are:

Although promising research continues, prevention remains the only cure.

Methods to improve detection and treatment are outlined below.

What’s the difference between mesothelioma and lung cancer?