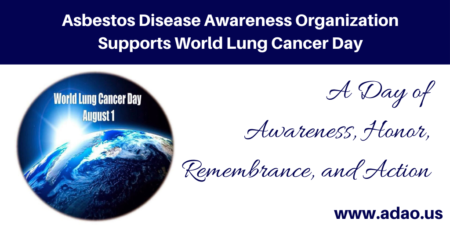 Each year, an estimated 34,000 Americans die from preventable asbestos-caused lung cancer, yet imports and use of the known carcinogen continue. Lung cancer is by far the leading cause of cancer death among both men and women. ADAO’s research reveals that an estimated 25% of lung cancer deaths may be caused from asbestos exposure. According to the World Health Organization (WHO), cancer is responsible for nearly one in six deaths globally. Lung cancer is the most common cancer worldwide, claiming more lives yearly than breast, colon, and prostate cancers combined.

According to the American Cancer Society, the 2020 estimates for lung cancer in the United States:

What’s the difference between mesothelioma and lung cancer?

Although both cancers can develop after asbestos exposure, mesothelioma is not lung cancer. Lung cancer develops within the lung while mesothelioma develops in the mesothelium, a protective membrane that covers the lungs and other organs. Mesothelial tumors can be non-cancerous (benign) or cancerous (malignant mesothelioma). There are four types of mesothelioma: pleural, peritoneal, pericardial and testicular. Both lung cancer and mesothelioma have a poor prognosis. Commonly, mesothelioma patients have a median survival of approximately 1 year from the time of diagnosis. The five-year survival rate for lung cancer patients is 56 percent for cases detected when the disease is still localized (within the lungs).

Although promising research continues, prevention remains the only cure.

Three Things to Know About Asbestos Exposure and Cancer Risk