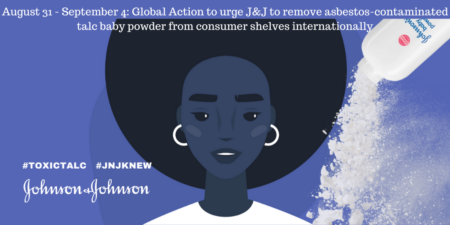 ADAO is appalled that J&J will not stop selling its asbestos-contaminated talc-based baby powder in the global market, even as it faces multiple lawsuits here in the United States. Thousands of women are suing the corporation over cancer concerns due to the usage of J&J’s toxic product.

Ovarian cancer is just one of many cancers caused by asbestos. Others include lung, larynx, and mesothelioma. Asbestos-caused diseases kill nearly 40,000 Americans each year, even though all these illnesses are entirely preventable.

Johnson & Johnson announced in May it would permanently stop selling talc-based Baby Powder in the U.S. and Canada because of a drop in demand. Nevertheless, the company said it will continue selling its contentious talcum powder-based product in international markets.

This is just another example of Johnson & Johnson ignoring the health and well-being of its consumers in the name of making a profit. It has been proven time and again that J&J’s talc-based baby powder is contaminated with asbestos. There is no safe level of exposure to asbestos, and J&J is actively participating in risking the lives of hundreds of thousands around the world.

On August 26, over 200 groups from 50 countries called on Johnson & Johnson again to remove the asbestos-contaminated talc-based powder from its shelves. As pointed out by ADAO’s ally, Black Women for Wellness, the powder has historically been aggressively marketed to women of color, putting Black women at a higher risk of asbestos-caused illness such as ovarian cancer and asbestosis.

Black Women for Wellness wrote in a press release that internal company documents suggest that as public concerns over Johnson & Johnson Baby Powder and its possible links to cancer grew, the company doubled down on aggressively marketing its talc-based baby powder to women of color, distributing free samples in Black churches and advertising on Spanish-language radio.

“We are deeply disappointed by your patronizing and dismissive response to our request that your company take its responsibility seriously to protect women around the world from unsafe chemical exposures by removing toxic products aggressively marketed to Black women,” Janette Robinson Flint, executive director of Black Women for Wellness, reportedly wrote to Alex Gorsky, Johnson & Johnson’s CEO.

ADAO firmly believes that those women deserve their day in court, and we need to do more to make sure asbestos is no longer legal and lethal in the United States. We need to ban asbestos once and for all in the U.S., with no loopholes or exemptions. The Alan Reinstein Ban Asbestos Now (ARBAN) Act of 2019 would ban asbestos once and for all. The bill was passed out of the U.S. House of Representatives Committee on Energy and Commerce in November 2019 with a strong bipartisan vote of 47-1.

We cannot even count on the Environmental Protection Agency (EPA) to help protect us from asbestos-contaminated talc. EPA recently released a dangerously narrow and flawed draft risk asbestos evaluation that has been shot down by the Science Advisory Committee on Chemicals (SACC) Report which confirmed, the draft evaluation contained multiple omissions and exclusions, leaving the public at dangerous risk of deadly asbestos exposure. Importantly, asbestos-contaminated talc is not addressed in the draft risk evaluation.

September is dedicated to Mesothelioma Awareness Month. We urge Congress to ban asbestos now so asbestos-contaminated products are taken off the shelves. But in the meantime, we need to continue to fight back against J&J. Join us in urging Johnson & Johnson to remove its asbestos-contaminated talc-based baby powder from the global market now.