Skip to content
Home/Blog/Behind the Lines: Asbestos industry workers will hold an international rally from Russia to Kazakhstan

Behind the Lines: Asbestos industry workers will hold an international rally from Russia to Kazakhstan

Behind the Lines: Asbestos industry workers will hold an international rally from Russia to Kazakhstan Posted on April 14, 2013

According to the 2013 U.S. Geological Survey (USGS) report,  Russia is the largest asbestos producer in the world, followed by China, Brazil, and Kazakhstan.  In advance of the Rotterdam Convention, Mr. Andrey Holzakov, chairman of Uralasbest trade-union committee, held a press conference on April 12 to announce a motor race from Yekaterinburg, Russia to Zhitikara, Kazakhstan. Uralasbest is the world’s largest producer of chrysotile. As translated,  Mr. Holzakov said that “in Russia in the chrysotile industry employs more than 50,000 people, including 9,000 at “Uralasbest.”  Please read and share today. Our solidarity is our greatest asset to end the production of asbestos and to globally ban asbestos.  Please note the below statement is translated via Google.  The original document is online at http://bit.ly/XBTtLA.   In unity, Linda

Asbestos industry workers will hold an international rally in Yekaterinburg

Yekaterinburg. April 12. Interfax-Ural – asbestos industry workers will arrange an international motor race to prevent the introduction of restrictions on the use of asbestos in the world and the destruction of the local industry. 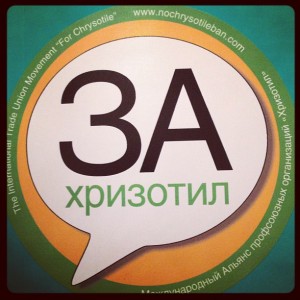 “The inclusion of chrysotile (asbestos view – IF) in the third prohibitive list will be reviewed in May by the Conference of Parties of the Rotterdam Convention in Geneva”, – the chairman of the international alliance of trade unions “Chrysotile” Andrew Kholzyakov at a press conference at the press center ” Interfax-Ural “in Yekaterinburg.

According to him, after the chemical into the third prohibitive list, it received special status, imposing severe restrictions on trade. As a result of these limitations, its production becomes unprofitable.

A.Holzakov said that in Russia in the chrysotile industry employs more than 50,000 people, including 9,000 at “Uralasbest.”

Chairman of the Youth League of the chrysotile industry, the City Duma deputy Vladimir Asbestos Kamensky said at a press conference that tax revenues from “Uralasbest” account for half of revenues.

A.Holzakov reported that the debate about whether chrysotile asbestos is harmful to human health, conducted for many years and continue to this day. On the one hand, in Europe, turned anti-asbestos campaign, on the other hand, Russian scientists say about the possibility of controlled use of chrysotile.

Chrysotile is used in the production of building materials, pipe, aerospace and defense industries.

In the world, as the chairman of the alliance, “Chrysotile”, annually produces about 2 million tons of chrysotile, of which about 1 million tons are Russian companies, and half of the extracted raw material is exported.

A.Holzakov added that protecting the asbestos industry, about 30 people in five cars overcome some 1.5 thousand km, starting on Friday and finishing from Yekaterinburg in Zhitikara (Kazakhstan).

Kamensky said that it was decided to protect the beryl in the form of the rally to “show weaknesses, where you can fill up our roads with gravel.”

The raw material base of the company – the world’s largest deposits of asbestos Bazenovskoye (Sverdlovsk region).

The main shareholders of JSC “Uralasbest” are the members of the Board and CEO of the plant.

Translated by Google: Asbestos. Disease of the old house How dangerous asbestosis, how to protect?