Skip to content
Home/Blog/Bill to Ban Asbestos Gains Momentum with Support in Both U.S. Senate and House

Bill to Ban Asbestos Gains Momentum with Support in Both U.S. Senate and House 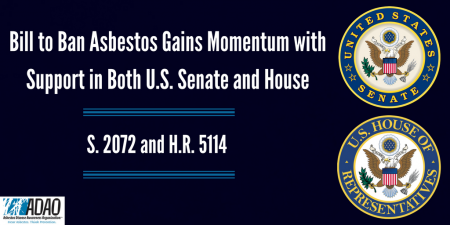 With this Act, the U.S. Environmental Protection Agency (EPA) would be permitted to make the manufacture, processing, use, commercial distribution, and disposal of asbestos illegal after 18 months of its passage. This is in stark contrast to the current review cycle that can take up to 7 years, as mandated by the Frank R. Lautenberg Chemical Safety for the 21st Century Act that was signed into law in June 2016.

Annually, nearly 40,000 Americans are estimated to die from preventable asbestos-related diseases, yet the imports and use continue. As U.S. Geological Survey (USGS) reported, “The chloralkali industry, which uses asbestos to manufacture semipermeable diaphragms that prevent chlorine generated at the anode of an electrolytic cell from reacting with sodium hydroxide generated at the cathode, accounted for nearly 100% of asbestos mineral consumption in 2017, based on bill of lading information obtained from a commercial trade database. In addition to asbestos minerals, an unknown quantity of asbestos was imported within manufactured products, including asbestos containing brake linings, knitted fabric, rubber sheets for gasket manufacture, and potentially asbestos-cement pipe.”

It is time for Congress to take action to allow the EPA to ban asbestos once and for all. We are deeply grateful to our Congressional allies who are committed to protecting public health. Take action, it’s quick and impactful – Call your reps and request that they cosponsor ARBAN! Together, change is possible.