Skip to content
Home/Blog/Call Your Senators Now! Tell Them to Fix S.697 for Real TSCA Reform

Call Your Senators Now! Tell Them to Fix S.697 for Real TSCA Reform

Tweet: Tell your Senators to FIX S. 697! #TSCA reform must ensure the @EPA can quickly take action on #asbestos. http://bit.ly/1N2wtN4 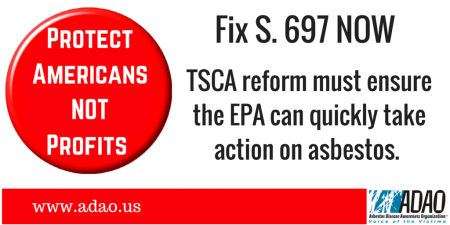 The Senate may vote on the the Udall-Vitter S. 697: Frank R. Lautenberg Chemical Safety for the 21st Century Act this week before they break for recess – it’s time to make your voice heard.  While this bipartisan bill seems like reform on paper, S.697 will be an irreversible rollback and will not ensure the EPA can quickly take action on asbestos.

We need your help now.

Many of your Senators are listed as co-sponsors to S.697 and they need to hear from you this week that TSCA reform must ensure the EPA can quickly take action on asbestos.  As written, this flawed bill won’t regulate the 84,000 chemicals in our homes, communities, the environment, or commerce.  The chemical industry has spent billions of dollars lobbying for this TSCA “reform”, and they will be the only winners if this bill is passed as written. Click here to find out why S.697 will not protect public health.

Now is your chance to affect real change and take a huge leap toward banning asbestos in the United States!

Even if your senators are not co-sponsors, we encourage you to call and make sure both of your senators will only vote to pass this bill with the previously mentioned asbestos amendment.

Follow the Twitter conversation with Deana @LungCancerFaces and ADAO @Linda_ADAO clicking here to Tell your Senators to FIX S. 697! #TSCA reform must ensure the @EPA can quickly take action on #asbestos. http://bit.ly/1N2wtN4

*Senators in Red are from states with 2 Co-sponsors