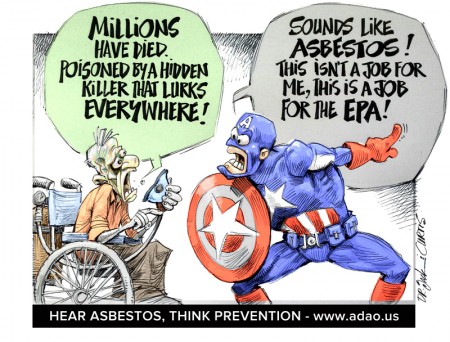 Captain America to the rescue! And just in time, because asbestos victims are long overdue for help from a hero. It’s time for the EPA to end the carnage and ban asbestos now.

ADAO is proud to share our first in a trilogy of political cartoons. In the David v. Goliath battle against the asbestos industry, we’ve used just about every tool in the box to get our message across. This is the first time we’ve used cartoons like this, and it might be just what the thing to show the EPA how badly we need their protection.

During the past 13 years, sometimes I think I’ve seen and heard it all – but then the industry debuts a new dirty trick. This time, when we finally have a ban imminently within our reach—and overwhelming scientific and legislative support behind the movement — the American Chemistry Council Chlorine Institute is lobbying the EPA to continue using asbestos, leaving thousands in peril.

The final images of Alan fighting for each breath will haunt me forever, and I only wish I’d had a superhero like Captain America during those dark days.  Since our early years, ADAO has built a thriving community of victims, activists, public health and environmental advocates, and lawmakers who share our common goal of ending the asbestos man-made disaster.

We’ve collectively become our own superhero in this fight, but we need a hand in this battle that could become the final stand against asbestos use in the US. Help Captain America deliver our cries of distress to the EPA and boost greater awareness by sharing this political cartoon far and wide.

Together, with the help our our heroes, we will win this battle against asbestos!