Asbestos, a known human carcinogen, can cause chronic lung disease as well as incurable respiratory diseases and mesothelioma, lung, gastrointestinal, laryngeal, colorectal and ovarian cancers. When handled, asbestos can separate into microscopic-sized particles that remain in the air and are easily inhaled. Medical experts agree that there is no safe or controlled use of asbestos. Due to the long latency period of asbestos-caused diseases, it can take between 10 to 50 years from the time of exposure to development of disease. 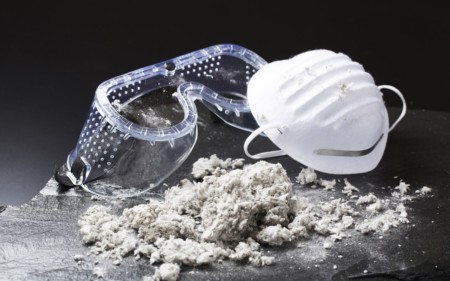 The first recorded case of asbestosis was reported by Dr. Montague Murray in 1906, yet mining of asbestos in the United States continued for almost 100 years because it was profitable. And, even though asbestos exposure has been known to cause diseases and death for more than a century, it remains legal and lethal in the U.S. today.

Once marketed as a “miracle mineral” for its flame-resistance, strength and flexibility, asbestos was used for decades in thousands of commercial products, such as insulation and fireproofing materials, automotive brakes and textile products, as well as cement and wallboard materials. Asbestos use increased during World War II, and the U.S. consumption of asbestos peaked in 1973. The widespread use of asbestos continues to this day. From 1900 to today, more than 31 million metric tons of asbestos has been consumed by the United States, including tons of raw chrysotile asbestos and consumer products that are still legally imported into the country. It can still be found in a wide range of manufactured goods, such as building materials (roofing shingles, ceiling and floor tiles, paper products and asbestos cement products), friction products (automobile clutch, brake and transmission parts), heat-resistant fabrics, packaging, gaskets and coatings. However, it can also be found in unexpected products, such as crayons and teen makeup.

In 1972, the U.S. Department of Labor Occupational Safety and Health Administration issued the Occupational Exposure Standard for Asbestos to “meet the need for preventing occupational diseases arising from exposure to asbestos dust.” That standard called for medical surveillance, warning labels and personal protective equipment, among other protective measures.

But this wasn’t enough.

The EPA attempted to ban asbestos in 1989 but was sued by Corrosion Proof Fittings—a company that used asbestos in its products. In 1991, an appeals court overturned the ban on that grounds that the EPA lacked the authority to pass an outright ban. Ultimately, the EPA was only able to ban five obsolete asbestos-containing products and any new commercial uses while it waited for Congress to take action (which it never did).

In 1966, E. A. Martin, Bendix Corporation, wrote “My answer to the problem is: if you have enjoyed a good life while working with asbestos products why not die from it. There’s got to be some cause.” The industry leaders were aware that asbestos-caused diseases may take decades to manifest.

Since its peak in the 1970s, asbestos has progressively become so unpopular that only one industry—a division of the chemical industry that makes chlorine—continues to use it in the United States. Industry after industry have turned away from asbestos, and not because it is illegal, expensive or difficult to obtain; but because the health risks are so great that the liability of continued use is unmanageable.

In 2016, Congress rewrote the chemical regulations law. The updated Toxic Substances Control Act (TSCA) finally gave the EPA the regulatory authority to protect Americans from dangerous toxic substances like asbestos. When it was signed into law, President Barack Obama remarked that the much-needed legislation was a necessary step forward, saying, “The [old] system was so complex, it was so burdensome that our country hasn’t even been able to uphold a ban on asbestos.” It has taken several more years, but now Congress is finally in a position to ban every use of asbestos.

Even more encouraging is that momentum and facts are on the side of asbestos safety. Increased prevention and risk management efforts will undoubtedly ensure that asbestos exposure is eliminated.

Nevertheless, asbestos continues to threaten many across America—especially workers involved in construction and demolition, who face high rates of occupational exposure. Prevention remains the only cure from asbestos-caused diseases.

Renovations and disturbances can cause asbestos fibers to be released into the air. If in doubt, always assume that a material contains asbestos. Commonly, these three rules will increase prevention efforts for workers and homeowners if they: