Skip to content
Home/Blog, Press Release/Congratulations Mr. Michael Regan on Your Confirmation as the New Administrator of the Environmental Protection Agency. Together, Let’s Ban Asbestos Now.

Congratulations Mr. Michael Regan on Your Confirmation as the New Administrator of the Environmental Protection Agency. Together, Let’s Ban Asbestos Now.

An Open Letter to the new EPA Administrator, Michael Regan

CONGRATULATIONS ON YOUR CONFIRMATION AS THE EPA ADMINISTRATOR. TOGETHER, LET’S BAN ASBESTOS NOW!

The following is an open letter to Michael Regan, the incoming Environmental Protection Agency (EPA) Administrator from Linda Reinstein on behalf of the Asbestos Disease Awareness Organization. 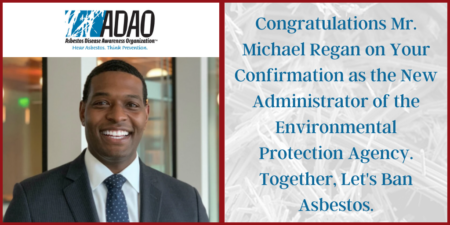 Congratulations on your confirmation as the new Administrator of the Environmental Protection Agency.

You have an admirable record of experience in working to advance environmental protection and sensitivity to environmental justice and human rights violations, a critical combination as we work for not just a better, cleaner, safer planet, but a more just world as well.

As the president and co-founder of the Asbestos Disease Awareness Organization representing thousands of other asbestos-impacted families, your response to Sen. Merkley’s Senate EPW hearing questions about limited and bifurcated EPA Risk Evaluation for Asbestos gives us encouragement.

For over 100 years, Americans have been exposed to tens of thousands of metric tons of  asbestos, a massive public health crisis in plain sight, even though we know this cancer-causing chemical is leading to death and disease. The scope of the problem, after decades of use, is massive in its scale. Asbestos importation and use have continued with virtually no restriction since the chemical industry sued, and won, to overturn the EPA’s attempt to ban it in 1989. As a result, nearly 40,000 Americans have died each year since then of asbestos-caused diseases like mesothelioma, lung cancer, and more.

There are two irrefutable facts about asbestos we have known for decades:

This alone provides a compelling case for EPA to make asbestos one of its highest priorities.

Yet we have seen decades of inaction and, in the last four years, a refusal to listen to the EPA’s own scientists and deference to the chemical industry who profits from America’s pain.

We are optimistic that under your leadership, EPA will finish the job it started thirty years ago — to prevent asbestos exposure and eliminate all asbestos-caused diseases. Every day that our elected official and public servants do not take action to prevent further exposure to this deadly carcinogen, is another day we are choosing to add innocent people to the list of over 40,000 Americans that die from asbestos-related diseases every year.

We look forward to working alongside you to create an asbestos-free future for our communities.