When we use makeup, we don’t think twice. Kids play dress-up with it, our teens turn to it as a rite of passage, and as adults make it part of our daily routines. We don’t bat a mascara-covered eyelash. But we should. Contaminated cosmetic products put us at risk for dangerous exposure to asbestos and other deadly toxins.

At the end of May, two cosmetic products sold by popular retailer, Claire’s, were recalled by the Food and Drug Administration (FDA) after testing positive for asbestos, a lethal carcinogen that causes mesothelioma as well as a host of other cancers and chronic illnesses. An estimated 40,000 Americans die every year from asbestos-caused diseases. 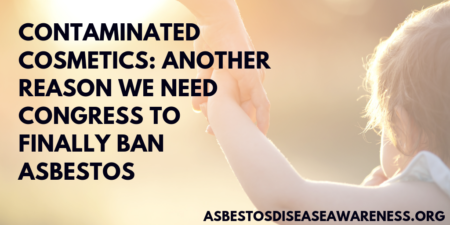 Although the scandal involving these particular makeup products made international headlines — one of which was from a line created in collaboration with teen YouTube star Jojo Siwa — this is only one the latest example of a long term trend of contaminated cosmetics making their way onto store shelves. Claire’s has been implicated several times after multiple makeup products the store sold were found to contain asbestos.

But Claire’s is far from the only culprit when it comes to selling dangerous cosmetics. For decades, Johnson & Johnson has been selling talc powders — including its popular baby powders — that are contaminated with asbestos. J&J has been forced to pay out millions in damages to customers who said their cancer was caused by using the products. Corporate giant, Colgate-Palmolive, has also been implicated in recent lawsuits for the same reason.

It’s alarming that these industries’ asbestos use remains unregulated given how regularly cosmetics products are found to be dangerous — even deadly. But our government consistently fails to take action to ban asbestos, despite decades of science proving it is a carcinogenic substance.

The Claire’s recalls this year have been the first time we’ve seen the FDA or any government agency step up to the plate and take on irresponsible industry behavior. Before now, contamination testing has been spearheaded by nonprofit organizations and the burden of proof has rested on consumers, who have been sickened and killed by tainted products.

After so many years of inaction in the face of asbestos-caused illness and death, it’s been incredible to see the FDA step up to the task. Unfortunately, there’s only so much the FDA can do given current laws and the limited jurisdiction.

Since the Environmental Protection Agency (EPA)’s failed ban 30 years ago, one million Americans have died from asbestos exposure. Scientists have known for over a hundred years that asbestos exposure kills,; and the U.S. government has known since at least the 1970s. It’s a betrayal at the highest level that despite the knowledge and rampant deaths, Congress has year after year failed to protect public health. It’s time we demand better.

Contaminated cosmetics represent a tiny fraction of the overall risk of asbestos exposure. A myriad of consumer products have been repeatedly found to contain asbestos, including children’s toys and crayons. The greatest asbestos-related threat to public health are the hundreds of tons of raw asbestos being imported into the country. Last year alone, 750 metric tons of raw asbestos were imported for manufacturing and use. The deadly consequences of this extends beyond factory walls, as neighboring communities are put at risk when asbestos is transported and disposed.

What we need is nationwide regulations of this deadly substance. The EPA has tried to ban asbestos and were unsuccessful. Since then, they’ve failed to act, and their latest actions make it abundantly clear that they cannot be relied upon to protect the public. Recent reports show they’ve ignored their own scientists’ recommendations and they watered down proposed asbestos regulations to the point of irrelevance.

The only realistic path forward is federal legislation that bans asbestos once and for all. Currently, there is a bill gathering support in Congress — the Alan Reinstein Ban Asbestos Now Act (ARBAN) — that would accomplish this goal. But without bipartisan support, it will be a challenge to get it across the finish line. ARBAN will allow us to follow in the footsteps of the nearly 70 countries who have already banned asbestos, including Colombia, who just recently banned the lethal carcinogen this June.

We deserve makeup, toys, crayons and powders that are uncontaminated, and we should be free from the deadly threat of exposure from raw asbestos fibers as well. Nearly 70 other countries around the world have already done it. It’s the time for the U.S. to ban asbestos is now.