This week, we would like to honor the story of Steve, shared by his wife, Linda, who is a part of our ADAO family.

(shared by his wife, Linda) 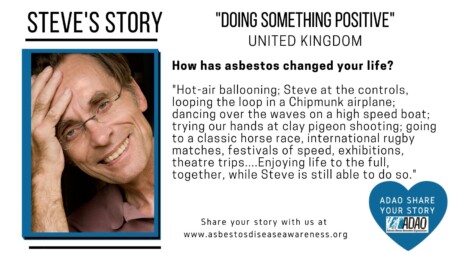 Long before Steve was born, his father was exposed to asbestos dust when he worked in the Bristol shipyards.  Steve’s dad was diagnosed with mesothelioma soon after retiring and died about a year later.  As a result, unlike many mesothelioma victims, we were familiar with disease and under no illusion about what the future held when history repeated itself in June 2009, as Steve was told he had the same disease that killed his father.

I still vividly recall how it felt to hear that devastating news and the overwhelming roller coaster of emotions that followed – disbelief, anger, fear, numbness, helplessness, hopelessness and grief as we looked into the future and saw nothing but a black hole.  Although we had decided to be open about Steve’s condition, I found it very difficult to talk about it, with tears welling up in my eyes and a lump in my throat.  I poured out my emotions in an e-mail to a friend and it was like opening a release valve.  I felt so much better afterwards.  It was her idea to write a blog and I’ve been doing it ever since to keep family and friends informed of Steve’s progress, raise awareness and share our experiences in the hope that it will help others going through the same thing.

I won’t pretend that those initial negative feelings have ever really gone away – there are still there, lurking below the surface and they occasionally bubble up when we go through a bad patch, or an innocent incident becomes a trigger for the emotions to erupt. However, looking back at the blog, it was suprising how quickly our attitude and outlook changed to something more positive.

Scouring the internet for information, we soon discovered Graham Sherlock Brown’s PETAL philosophy for living with mesothelioma, which I would recommend to anyone!  Through a press cutting sent by a friend, we made contact with Debbie Brewer, a fellow mesothelioma sufferer in Plymouth UK, and were buoyed along by her zest for life.  Debbie introduced us to the Meso Warriors on Facebook, who have been a huge support and a mine of information.  Through this network we began to appreciate the scale and global impact of asbestos on the lives of innocent people, their families and friends.

Once diagnosed, Steve’s medical team acted swiftly.  Within a week, a treatment plan was in place.  Two weeks later he started a course of radiotherapy to zap the “ports” where the chest drains had been inserted during his pleurodesis operation, so as to minimize the risk of the cancer seeding in these vulnerable areas.  He was offered and accepted a place on a drug trial (a combination of cisplatin and Velcade, a biological therapy which inhibits cancer growth) and began the first of six cycles of treatment just three weeks after diagnosis.

It was a grueling three weekly schedule – hospital twice a week for two weeks, followed by a rest in week 3 which included returning to hospital for a scan every other cycle.  In spite of the side effects of chemotherapy – fatigue, nausea, occasional vomiting, increasing peripheral neuropathy (numbness in fingers and toes) – we got out and about at every opportunity, making the most of good weather, enjoying the small pleasures of life and catching up with family and friends as often as possible, with Steve pacing himself and resting whenever necessary.  We began to understand that it’s possible to live with mesothelioma, rather than die because of it.

As I write, Steve’s next assessment is in mid-June 2012, almost three years to the day since he was first diagnosed.  As always, we will be hoping for good news, but mentally preparing ourselves in case it’s not.  This is how we live our lives now – we rarely commit ourselves to anything important beyond the date of Steve’s next assessment.  However, once the assessment hurdle is passed, there’s no holding us back.

In the last three years or so, we have traveled widely in the UK and Europe finally seeing those places we had planned to visit “one day”.

After years of promising to be more sociable but not quite making it, we have enjoyed visiting friends, having people visit us and organizing social gatherings. In the “old days” we might have hesitated about doing something new.  These days, if offered the opportunity, the answer is usually yes, provided we can fit it in before Steve’s next assessment.  Hot-air ballooning; Steve at the controls, looping the loop in a Chipmunk airplane; dancing over the waves on a high speed boat; trying our hands at clay pigeon shooting; going to a classic horse race, international rugby matches, festivals of speed, exhibitions, theatre trips….Enjoying life to the full, together, while Steve is still able to do so.

When Steve was first diagnosed with mesothelioma, I wondered whether he would still be alive for some important milestones in our lives – significant events like our daughter’s 21st birthday, our son’s 30th birthday; both of us reaching state “retirement” age – even though we are more active now than pre-diagnosis!  He has been there to enjoy all of them so far. The next big milestone is our 40th wedding anniversary, less than three weeks away as I write.  Another milestone within our grasp!

We know that this state of affairs won’t last forever and times will get very tough indeed.  However, when that day comes, we will have some wonderful experiences in the memory bank to look back on and enjoy, and we know there is a community of real and virtual friends who will be there for us, whenever we need them.

Things have changed so much for the better since Steve’s father was diagnosed with mesothelioma 20 years ago.  We can only hope that there will be a medical breakthrough in the next 20 years, the sooner the better, for those whose mesothelioma journey has already begun, although it may be decades before they become aware of their condition.  We also hope that during this time there will be a global ban on the manufacture, import, export and use of asbestos, and that the world will wake up to the threat from the asbestos that’s already woven into the fabric of our daily lives and take this threat seriously.  We owe this much to the victims who have gone before and those who are now fighting for their lives.  We send our love to each and every one of you.

You can read more on http://doingsomethingpositive.blogspot.com/