Skip to content
Home/Blog/Earth Day: History is a Great Teacher to Those Who Listen

Earth Day: History is a Great Teacher to Those Who Listen 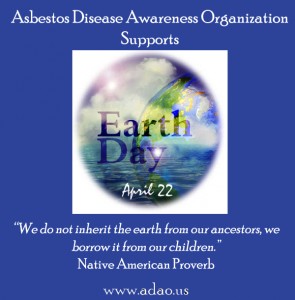 When Earth Day began on April 22, 1970, Richard Nixon was our president, “Bridge Over Troubled Water” by Simon and Garfunkel was the number one song, “Patton” won an Oscar for the Best Film, it only cost 33 cents to mail a letter,  and Woodstock had changed rock concerts forever.  There is one fact that remains constant – “History is a great teacher to those who listen.”

During these past four decades, the Earth Day momentum has exponentially grown and technological advancements have removed many borders and boundaries from our lives.  Thanks to Earth day, individuals, communities, organizations, and governments around the world come together as one, to acknowledge and protect our planet.

Earth Day has also become a time to highlight the asbestos environmental and public health hazards from mining this killer mineral.  As the death toll continues, the simple fact is asbestos is responsible for the largest man-made environmental disaster.  Patients and families around the world continue to share educational information about prevention and the need for a global asbestos ban to eliminate deadly asbestos-caused diseases.

“According to World Health Organization estimates, more than 107,000 people die each year from asbestos-related lung cancer, mesothelioma and asbestosis resulting from occupational exposures. One in every three deaths from occupational cancer is estimated to be caused by asbestos. In addition, it is estimated that several thousands of deaths can be attributed annually to exposure to asbestos in the living environment.”

Asbestos has caused the largest man-made environmental disaster, yet the asbestos industry defiantly continues to mine asbestos and the shocking asbestos mine photographs chill our blood.  USGS reported an estimated 2 million tons of asbestos was mined in 2012 and states, “The United States is dependent on imports to meet manufacturing needs. Asbestos consumption in the United States was estimated to be 1,060 tons, based on asbestos imports through July 2012. The chloralkali industry accounted for an estimated 57% of U.S. consumption; roofing products, about 41%; and unknown applications, 2%.” 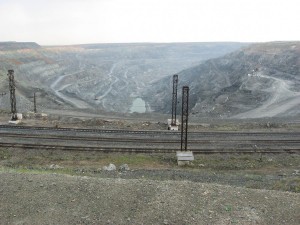 The Chrysotile Association touts that the Russian Federation has “the world largest reserves of chrysotile asbestos (11 deposits). Asbestos mines and mills (Uralasbest. OJSC, Orenburg Minerals, LLC, and Tuvaasbest) develop the fields that concentrate 80 % of balance reserves of ore. These reserves are sufficient for over a hundred years of work. Almost 38.5 thousand people are employed by the Russian chrysotile industry that incorporates 3 asbestos mines and mills, 24 asbestos cement combines, 9 asbestos technical factories, 2 asbestos board factories, and 3 Research Institutes of Technology.”

It is imperative that we take the necessary steps to abolish asbestos mining, manufacturing, and commerce to protect our children, grandchildren, and our planet. As a Native American proverb says, “We do not inherit the earth from our ancestors, we borrow it from our children.”