A few months ago, the Asbestos Disease Awareness Organization (ADAO) received two internal emails from anonymous sources at the Environmental Protection Agency (EPA) that documented the deep concerns of the agency’s career staff about their failure to take effective action on asbestos under the Toxic Substances Control Act (TSCA).

The emails were sent by 17 career employees – including senior scientists, cleanup specialists, and lawyers – to their higher ups at EPA Headquarters. They show that dedicated EPA asbestos experts have voiced their disappointment with EPA’s weak and limited efforts to reduce and eliminate asbestos exposure and risk. The staff members also made strong recommendations––including a complete ban––that EPA leadership has rejected. 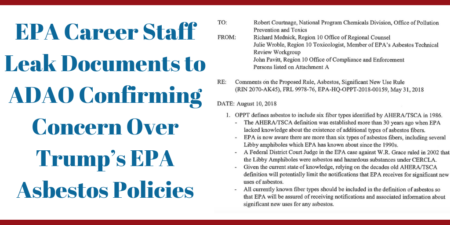 “EPA should seek to ban all new uses of asbestos,” the staff members wrote, “because the extreme harm from this chemical substance outweighs any benefit… there are adequate alternatives to asbestos.”

ADAO shared these documents with the New York Times (NYT) who reported on the emails. The NYT story, “E.P.A. Leaders Disregarded Agency’s Experts in Issuing Asbestos Rule, Memos Show”, ran on May 8th, just hours before the U.S. House Energy and Commerce Subcommittee on Environment and Climate Change held a legislative hearing entitled “Ban Asbestos Now: Taking Action To Save Lives And Livelihoods.”

The documents reveal that there was significant internal criticism of the Agency’s recent “Significant New Use Rule” (SNUR) for asbestos. This regulation, requires that EPA be notified before certain old uses of asbestos come back into commerce but does not restrict use. Career EPA staffers make it clear that the SNUR does not go far enough to regulate asbestos to protect public health. They call on the Agency to join “the United Kingdom, Japan, South Korea, France, Italy, Spain, Australia, Germany, the Netherlands, Finland, and many others” who have banned asbestos use and imports.

The EPA staffers also raised concern about EPA’s decision not to evaluate the risks of “legacy” asbestos, stating that it is “just as dangerous as… newer asbestos.”

The ongoing EPA risk evaluation excludes the dangers to public health of asbestos present in millions of American schools, homes, and buildings. The staff members’ email details several real-life situations where this legacy asbestos is putting Americans at risk and yet its presence is often unknown or uncontrolled.

These emails make clear that career scientists and staff at EPA support the same initiatives that ADAO advocates for. Most importantly, the ban asbestos movement can know that the worldwide medical consensus surrounding this carcinogen is recognized and accepted by career EPA scientists.

ADAO is tremendously grateful to the anonymous EPA staffers who shared these documents with us for exposing the truth. They trusted ADAO would take their concerns seriously and bring them to light and we did.

We echo their courageous calls for a ban. If you agree with these career EPA employees and ADAO, you can support the effort to ban asbestos by contacting your Members of Congress and urge them to cosponsor the bicameral Alan Reinstein Ban Asbestos Now Act of 2019.