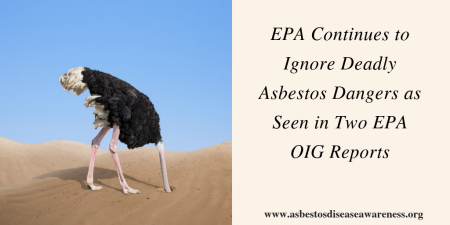 Last week, the Environmental Protection Agency’s (EPA) Office of Inspector General (OIG) issued a report revealing that it took seven months for North Carolina officials to contact the EPA after asbestos was identified at a hospital demolition site.

After receiving notice of the asbestos exposure, North Carolina took seven months to notify the EPA – leaving a large window of time for individuals to be exposed to the deadly chemical.

The report, “Delayed Cleanup of Asbestos Debris at the Old Davis Hospital Site Necessitates Changes for EPA Region 4 and North Carolina,” states, “As a result of the state’s lack of action, individuals near the demolition site were at risk of asbestos exposure.”

A day before the hospital report, the EPA OIG issued another report “EPA Needs to Re-Evaluate Its Compliance Monitoring Priorities for Minimizing Asbestos Risks in Schools,” detailing the failures of the EPA to appropriately monitor and manage asbestos in our schools.

Despite observing piles of debris at the hospital demolition site and suspecting they contain asbestos, North Carolina state personnel did not immediately contact the EPA.

North Carolina officials cited a lack of resources, saying there was an absence of authority, which can be linked back to the EPA’s failure to enforce asbestos guidelines.

With nearly 40,000 Americans dying each year from preventable asbestos-related diseases, these two reports display a pattern: Americans cannot identify or manage the risk of asbestos. When the risks and dangers of asbestos are unknown, exposure continues. The only way to combat this is to implement a no exemptions ban on asbestos. It’s time for Congress to keep Americans safe by enforcing its regulations and banning asbestos now.

The EPA has failed Americans again– and has turned to playing politics with an issue that is nonpartisan.

In the report, the EPA blames the the state, saying, “As a result of the state’s lack of action, individuals near the demolition site were at risk of asbestos exposure.” However, the EPA has balked at the idea of banning asbestos for nearly 20 years and has not complied with its own regulations and guidelines. In fact, the EPA seems to be using these reports as a political stunt as these two incidents occurred under President Obama.

As an example of that, a spokesman for the EPA issued the following statement after the school report was released: “The previous administration did not do enough to provide adequate protections to children from asbestos exposure. The Trump administration is taking proactive steps to reduce asbestos exposure, which includes a new proposed regulation that, for the first time, would prohibit the currently unregulated former uses of asbestos.”

The Trump administration claims to be “taking proactive steps to reduce asbestos exposure,” but since 2016, it has distorted the law that removed obstacles to chemical regulation. Trump has filled the EPA with political appointees who are former lobbyists for polluting industries, and has been on record professing his love for asbestos.

These reports not only identify the need for a ban but clearly show the EPA has done next to nothing to prevent asbestos exposure and spread awareness of the deadly chemical.