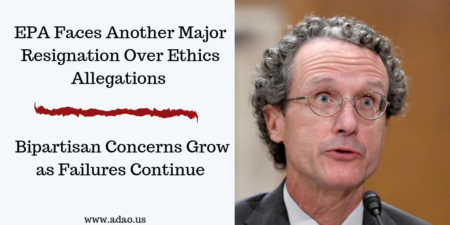 Almost a year to the day that Scott Pruitt announced his resignation as Administrator of the Environmental Protection Agency (EPA), the Agency is facing two new major controversies. Bill Wehrum, who led the EPA’s air quality office and helped spearhead the Trump Administration’s deregulatory agenda, will step down from his position amid multiple accusations of ethics violations.

According to Citizens for Responsibility and Ethics in Washington, an anti-corruption watchdog organization, Wehrum violated an ethics pledge by continuing to interact with his former clients and employers once appointed to his position. “Less than a month after his appointment,” the organization said in a statement, Wehrum assisted his former law firm “in the preparation of a memorandum used in litigation,” gave a presentation at their D.C. office, and interacted with former clients.

[Wehrum’s law firm] to advocate against EPA’s attempts to regulate their industry.”

Multiple members of Congress, including ban-asbestos champion Chairman Frank Pallone, Jr., have called for an investigation into whether or not Wehrum was using his position at the EPA “to favor a client of [his] former law firm.”

Wehrum’s departure is the second major personnel change faced by the Agency in recent weeks. Nancy Beck, a former American Chemistry Council lobbyist, was brought on as the Agency’s deputy assistant administrator in early May.

Just a day before Wehrum’s announcement, Alexandra Dunn, Assistant Administrator for the EPA’s Office of Chemical Safety and Pollution Prevention, made an announcement that has cast doubt over whether the Agency will be able to meet a vital risk assessment deadline mandated by the Toxic Substances Control Act (TSCA).

“It is a tall order to complete the amount of work that we have,” Dunn said at the “TSCA: Three Years Later” conference in Washington, D.C. The Agency was tasked by TSCA with evaluating the risks posed to the American public by 10 toxic chemicals by December 2019, but has so far delivered an assessment on only one chemical. While Dunn has promised that the Agency is “pushing hard” to meet the deadline, bipartisan frustration surrounding risk evaluations has grown.

Criticism is increasing from within the Agency itself as well. On May 8, the New York Times published documents leaked from senior EPA staff revealing that Agency leadership was acting against the advice of their career scientists and lawyers with regard to asbestos policy. The documents, which were leaked via ADAO, call for an outright asbestos ban. During a hearing before the U.S. House Energy and Commerce Subcommittee on Environment and Climate Change that same month, numerous Members, both republicans and democrats, expressed skepticism of current asbestos regulations.

“Why in God’s name do we still use this?” Rep. David McKinley (R-WV) asked in the hearing, speaking of asbestos.

Rep. Buddy Carter (R-GA) joined his suspicions: “If it’s coming [from] out of the country, [why are we] not regulating it?” he asked.

ADAO continues to fight for this very idea: a no-exemptions, no-loopholes ban on a known carcinogen that kills 40,000 Americans every year. As the EPA faces criticism for its policy on toxic chemicals, both internally from careers staffers and from Americans, it once again proves it is time for Congress to act and pass the Alan Reinstein Ban Asbestos Now Act. Americans can’t afford to watch the EPA fail to ban asbestos, again.