Washington, DC — The Asbestos Disease Awareness Organization (ADAO), an independent nonprofit dedicated to preventing asbestos exposure through education, advocacy, and community work, today praised the Environmental Protection Agency’s (EPA) long-awaited proposal to prohibit the importation and use of chrysotile asbestos under the Toxic Substances Control Act (TSCA), but urged Congress to go further to assure a comprehensive ban on all commercial asbestos. 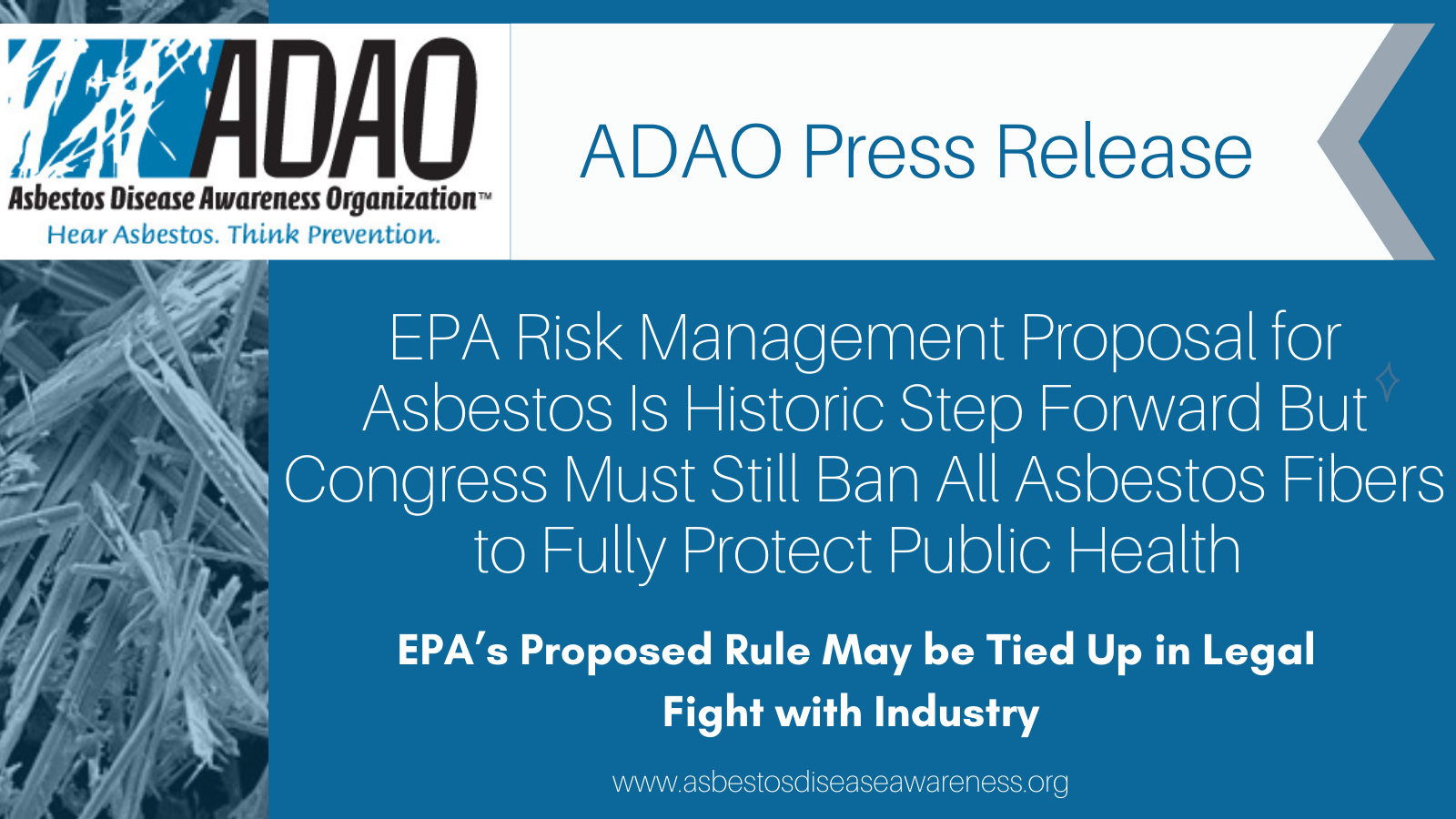 In a new proposed rule issued today, EPA would ban importation of raw chrysotile asbestos and chrysotile-containing products for the six uses addressed in its Part 1: Chrysotile Asbestos Risk Evaluation. This ban would apply to the chlor-alkali industry – the only  current US importer of raw asbestos – which manufactures chlorine and caustic soda. It also would prohibit asbestos-containing sheet gaskets, brake blocks, aftermarket automotive brakes/linings, other vehicle friction products, and other gaskets also imported into the U.S.

EPA’s proposed rule for chrysotile asbestos represents a critical initial milestone for the Agency and for the advocates, scientists, unions, and asbestos victims who have worked tirelessly to ban all six asbestos fiber types.

In response to the new proposal, Linda Reinstein, President of ADAO said:

“EPA’s proposed restrictions on chrysotile asbestos are a strong step forward in eliminating exposure to a substance that is killing 40,000 Americans each year. We strongly support putting an end to the dangerous use of chrysotile asbestos by the chlor-alkali industry, which has irresponsibly failed to adopt proven non-asbestos technology in the decades since it became available.”

“In their meetings with the administration, chlor-alkali producers have opposed any restriction on asbestos imports and use. There is no safe level of exposure to asbestos and it would be indefensible to grant a loophole to an industry that has put its own profits ahead of public health. Industry opposition threatens to undermine the proposed rule and tie it up in litigation that delays it for years, allowing asbestos imports to continue.”

“These roadblocks underscore that importation and use of asbestos will only stop for sure when Congress enacts a comprehensive asbestos ban that prohibits all six asbestos fibers. Congress continues to work on the Alan Reinstein Ban Asbestos Now Act (ARBAN) and ARBAN’s passage by Congress is needed more urgently than ever.”

EPA’s proposed rule is limited to chrysotile asbestos and fails to cover the other five recognized asbestos fiber types: crocidolite, amosite, anthophyllite, tremolite, and actinolite  Other regulatory mechanisms that EPA has are no substitute for a clear and comprehensive ban and will not ensure that such toxic products do not harm Americans.

“Legislation would ban all six recognized asbestos fiber types,” said Bob Sussman, ADAO counsel. “Without legislation, current and future exposure to asbestos fibers that have the same lethal properties as chrysotile will continue. Congress can put a stop to this exposure by banning all six asbestos fibers now.”

When inhaled, microscopic asbestos fibers can become lodged in the lungs, irritating lung tissues. Exposure can cause malignant (cancer-causing) and non-malignant (non-cancer-causing) diseases such as asbestosis, pleural disease, lung cancer, mesothelioma, cancer of the larynx, ovary, and others. Associations have also been observed between all forms of asbestos and cancer of the pharynx, stomach, and colorectum. From 1991 to 2021, more than one million Americans have died from preventable asbestos-caused diseases.

USGS reports that, in 2020, 305 tons of asbestos were imported into the U.S. by chlor-alkali producers, an increase of more than 30 percent from the prior year. According to a Chlorine Chemistry Division 2020 document, Olin Corporation and Occidental Chemical Corporation (OxyChem) have 10 plants in Alabama, Arkansas, Kansas, Louisiana, New York, and Texas that use chrysotile asbestos to manufacture diaphragms used in the production of chlorine and caustic soda.