Posted on January 15, 2014: The Ahmed Family: Bringing Asbestos Awareness and Action to Pakistan

The International News: February 2, 2014 Banned across the world, asbestos continues to plague Pakistan 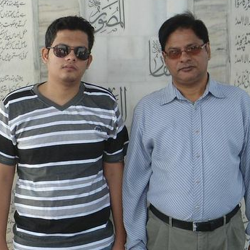 Since 2007, Syed Haroon Ahmed has been investigating the death of his brother, Syed Fareed Ahmed, from cancer of the tongue at age 55. Through his research, he’s uncovered countless examples of dangerous exposure to asbestos at the Dadex factory where his brother worked in Karachi, Pakistan. His son, Mezab Ahmed, has taken up his father’s work in seeking justice for his brother and fighting asbestos in Pakistan. On February 1st 2014, Mezab held Pakistan’s first ever Ban Asbestos Conference; a very successful event, even drawing Pakistani presidential recognition. Mezab has also recently published a short 115 page special “Ban Asbestos Pakistan souvenir program ” emphasizing the countries need for greater asbestos awareness, healthy and safety. The book features the complied evidence by the Ahmed family that attests to the dangers of asbestos. Messages from the President of Pakistan and several other dignitaries from Pakistan and abroad are featured along with a copy of the BAN Asbestos Pakistan Petition and the ADAO 10th International Conference Declaration. The book further expands on the dangers of asbestos by outlining a plan for development of a national program for the elimination of asbestos related diseases and ends by listing the health issues on the Region from asbestos. ADAO is thrilled for the opportunity to interview Syed Mezab Ahmed about fighting for justice in the Pakistani courts, his Ban Asbestos Conference and special souvenir program, as well as his future plans for asbestos awareness in Pakistan. Mezab is also the co-founder of the Mesothelioma General Hospital Foundation in Pakistan. 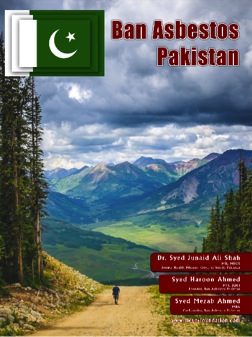 How long have you been working to ban asbestos in Pakistan?
I and my father Syed Haroon Ahmed had started working on this movement from 2007 after the death of my uncle Syed Fareed Ahmed (Late) the same year. Its almost 7 years now.

What is the most significant accomplishment or progress you have made during the past year?
My case moving in the Supreme Court of Pakistan, The Constituted Commission submitting its report in the Court, and the 1st National Ban Asbestos Pakistan Conference.

What is the most challenging obstacle you’ve faced during your Supreme Court case for your late uncle, Syed Fareed Ahmed?
The Government officials were manipulating the Environment Tribunal and were trying to help Dadex Eternit Group and its boss, have also received and still receiving life taking threats, I believe I do not have a normal life now, as I am fighting against the most powerful Mafia’s of Pakistan alone. I cannot peacefully live my life now as others do as all the time me and my family has fear that maybe tomorrow any one of our family members might get killed or kidnapped from Dadex and its business associates. We are receiving pressure to stop everything right away but as my father says, I have lost my brother but I wont let any other person loose his brother due to Asbestos.

What do you want to tell President Mamnoon Hussain?
The President is a very nice person, and I only want to tell him that to help us in BAN ASBESTOS and it’s safely removal from everywhere in Pakistan. His great help in saving the human lives from asbestos cancer diseases will always be blessed be Almighty God.

Your Ban Asbestos Conference souvenir program is impressive. What are your plans for 2015?
The said souvenir has cost me too much and it went very expensive, well I believe from this souvenir BAN ASBESTOS PAKISTAN people will get good awareness about the hazards of Asbestos. My future plan for 2015 is to organize a WORLD ASBESTOS CONGRESS here in Karachi Pakistan in which I really intend to invite UN General Secretary as Chief Guest. In this Congress people (Oncologists, Lawyers, Social Workers, Environmentalist etc) from 100 countries will participate and it will be historic.

How has collaboration with the Asbestos Disease Awareness Organization furthered your efforts in Pakistan?
Asbestos Disease Awareness Organization is the only organization who has helped me always and I want to thank Mrs. Linda Reinstein for her trust and support in me. She is the only lady who has shown her interest in saving the lives of the people of Pakistan. She is like my teacher and May Almighty God always bless her and her good family with all the happiness and success Ameen.

Mezab, thank you for the interview!   We look forward to reading your new program and supporting your 2nd National Ban Asbestos Pakistan Conference in 2015!