Skip to content
Home/Blog/Exclusive Interview with Pulitzer Prize Journalist, Andrew Schneider, about the New Book, An Air That Still Kills 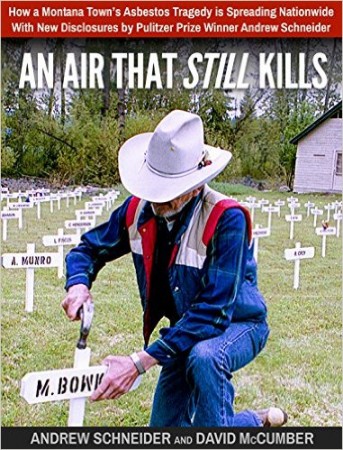 The Asbestos Disease Awareness Organization is pleased to share that Andrew Schneider and David McCumber have published an updated book, An Air That Still Kills, which includes sobering new disclosures about the growing threat of asbestos from Libby, Montana.

An Air That Kills published in 2004 and told the story of the worst environmental disaster in U.S. history and the devastating impact it had on the small rural town of Libby. Unfortunately this tragedy continues to this day. Schneider and McCumber’s new work expands on the original version and includes the latest studies by experts who say that Libby’s asbestos “can sicken and kill at rates thousands of times greater than previously thought”.

An Air That Still Kills is described as a “haunting, meticulously reported account that will introduce you to the courageous miner’s daughter and the cowboy crooner who took on one of the nation’s most powerful corporations, and to the government team who at first refused to believe the duo.”

Andrew’s years of experience in public health, safety and environmental issues, including asbestos contamination, has garnered the attention of national and global leaders and has helped voice the plight of thousands of people who have fallen victim to unsafe environmental conditions. Andrew has won two prestigious Pulitzer Prizes, one in public service and one for specialized reporting.

I recently spoke with Andrew about his new book and his new findings in Libby, Montana.

ANDREW: The motivation for doing a second book on what began in Libby was two-fold: the story of what happened there didn’t end when the book was published and, of equal importance, the discoveries from the new research on the actual toxicity and health effects of the Libby asbestos were far more frightening than even the government had ever imagined.    Some of the 37,000 new words address unanswered questions from the first edition.  We had gotten many calls and emails from people asking for an update on people like Les and Gayla and the three early EPA supermen – Paul Peronard, Chris Weis and Aubrey Miller. Many also wanted to know what happened during the painfully long,10-week criminal trial of W.R. Grace v. the U.S. We offer a day-by-day breakdown of the courtroom antics, which many people believe wrongly kept the Justice Department from presenting evidence of Grace’s lethal actions.

LINDA: Why was the title changed?

ANDREW: I went to Libby on a frigid December night to watch a hotshot team of EPA toxicologists and health specialists release the long-awaited report on how safe the town was after almost a half-billion dollars was spent on the cleanup. The conclusion was the asbestos air concentrations in Libby had been reduced to about 100,000 times lower than when the mine and processing facilities were in operation. The asbestos levels in Libby were as safe as other Montana cities, the specialists documented.

After the meeting, I was interviewing one of the senior toxicologists about the success the EPA has had and she said: “Libby may be safer now, but there is much more to do. There’s still Libby asbestos in the Zonolite in homes all over North America. To be accurate, your new book has to be called An Air That Still Kills. And we did.

LINDA: What could the EPA have done differently when handling the asbestos problem in Libby, Montana?

ANDREW: We need to give credit to many of those government and academic heroes who rushed to Libby and stormed into a situation of massive asbestos contamination of a scope never before seen. For years they did the best they could to protect the townsfolk in the face of objections from their higher-ups. There were many things that would have made the cleanup go faster and better had the political appointees in EPA headquarters cared as much as those on the frontline. The most egregious action that led to the deaths and sickening of so many was the concealment of a detailed EPA-funded study. It was hidden not only from the public but also from the EPA team trying to control the danger. The costly and extensive research predicted the lethal exposure in Libby and throughout the country 15 years before Libby’s plight was revealed in the Seattle Post-Intelligencer. That was criminal.

LINDA: What were some of the most important findings included in the new book?

ANDREW: The reason it took four years of additional reporting was waiting for the scientific confirmation of the newly proven and heretofore underestimated danger from exposure to the Libby asbestos. Three studies by Dr. Jim Lockey – which covered 30 years of the deterioration of the same workers earlier exposed to Libby asbestos – show the contaminated Montana vermiculite killed and sickened faster and at much lower doses than any other asbestos the government has regulated. Lockey’s outstanding work confirmed the earlier prediction from Dr. Alan Whitehouse of the real hazards from Libby. Whitehouse’s work was based on hands-on examination of hundreds of asbestos victims. We also discuss frightening findings from Prof. Jean Pfau who, with her colleagues in Montana, observed and documented that further health concerns should be added to the list of several medical issues faced by those exposed to Libby asbestos. Pfau found an alarming number of cases of autoimmune disease including lupus, rheumatoid arthritis and systemic sclerosis.

LINDA: What shortcomings did you encounter during your work?

ANDREW: The new research for the book illustrates why so many cases of asbestos disease go undetected, and why many physicians don’t ask the right questions or order the most appropriate diagnostic tests. The result of this inadequate delivery of medical care lends support to another chapter of the book where public health experts painfully explain the importance of an accurate body count, that without a pile of bodies at which to point, the government will never release funds to address the problem. As Dr. Aubrey Miller said: “Public health does not mean waiting for the bodies to be counted before anything is done.”

Accurate numbers would also bolster support of efforts to ban the importation and use of asbestos in the U.S.

LINDA: Why have regulators repeatedly failed to warn the public about the continuing hazard from vermiculite made from Libby asbestos.

ANDREW: I can’t begin to explain why EPA headquarters tenaciously refuses to warn the millions of home and business owners who have the contaminated Zonolite in their walls and attics and most likely have no clue of the danger.  Even the most zealot EPA opponent would never expect the agency to pay for the cleanup of millions of contaminated homes. But almost everyone with common sense believes that government has an obligation to inform its citizens of dangers they face.

LINDA:  Do you have a message for Congress or the EPA?

ANDREW: I wish I knew what it will take to get Congress to move to properly ban asbestos or get the EPA and other federal health agencies to effectively warn people across the country that they may be living with a killer. Your organization, ADAO, has made repeated superhuman efforts to educate lawmakers and the public on the need for the ban. Continued efforts by your members and top medical specialists you work with are the best hope there is to educate those who can force the changes so desperately needed. Keep it up.

LINDA: Why did you find it important to produce your book in various formats?

ANDREW: Two professors – one from an environmental law program and another from a school of public health – asked if we would do an e-version of the book to be used as a text. So, An Air That Still Kills is being published in three formats. The iBook interactive version has a map, and source documents

[KH1] , videos and audio.  And for those who don’t use iPads or Macs, there is also a Kindle version and the 560-page print edition.

Learn more at the An Air That Still Kills website or to place an order. Follow the Twitter conversation with the authors and ADAO at @coldtruthreport, @dcmccumber, and @Linda_ADAO.

On behalf of all asbestos victims and family, ADAO would like to thank Andrew and David for their contributions to banning asbestos and thank Andrew for taking the time to speak with us.