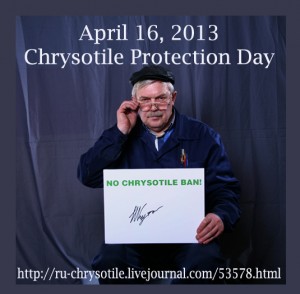 Behind the Lines: Asbestos industry workers will hold an international rally from Russia to Kazakhstan Posted on April 14, 2013

Shockingly, April 16, 2013, is Chrysotile Protection Day. In advance of the The Rotterdam Convention’s discussion of chrysotile asbestos, the Chrysotile Association has launched a labor campaign in Russia that features asbestos workers showing their support for the so called “safe use of asbestos”. In addition, the protest attempts to keep Chrysotile off of the Prior Informed Consent (PIC) list. The asbestos industry will stop at nothing to continue the deadly toxic asbestos trade of mining, manufacturing and commerce. As part of the campaign, workers are photographed with a sign that says, “No Chrysotile Ban!” in an effort to show the international community that they work with asbestos and are “happy, alive and well!”

The Rotterdam Convention (on the Prior Informed Consent Procedure for Certain Hazardous Chemicals and Pesticides in International Trade) will be held April 28 – May 10 in Geneva, Switzerland. As of now, 5 of the 6 types of asbestos fibers are on the PIC list: Actinolite, Anthophyllite, Amosite, Crocidolite, and Tremolite. This year, the Rotterdam Convention will be discussing whether Chrysotile should be added to the PIC list.

Look below to view the complete collection of Chrysotile asbestos worker photographs.