Skip to content
Home/Blog/From Success to Failure. Five Things You Need to Know about EPA’s TSCA Implementation Asbestos Failures that Impact You

From Success to Failure. Five Things You Need to Know about EPA’s TSCA Implementation Asbestos Failures that Impact You 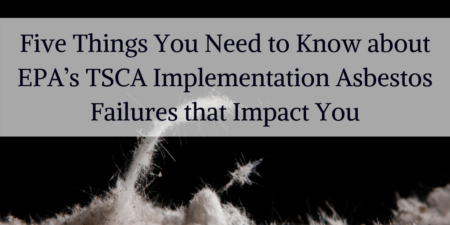 From success to failure.

On June 22, 2016, President Barack Obama signed the The Frank R. Lautenberg Chemical Safety for the 21st Century Act (“LCSA”) into action. This was a huge step forward after many years of attempts to strengthen the Toxic Substances Control Act (TSCA), and it established a new integrated process for prioritizing chemicals, conducting risk evaluations on high-priority chemicals, and issuing rules to eliminate unreasonable risks identified in risk evaluations.

Then, it looked like we were finally making strides in the right direction to protect public health from the lethal dangers of asbestos. However, in the four years since, nearly 160,000 people have died from asbestos-related diseases. All of these deaths were completely preventable. The U.S. meanwhile continues to import and use hundreds of tons of raw asbestos each year.

This past March, the Environmental Protection Agency (EPA) released the Draft Risk Evaluation for Asbestos. Unfortunately, the evaluation will fail to protect public health as it is full of exclusions that will keep Americans in grave danger of the harms of asbestos exposure.

In short, the risk draft evaluation presents a dangerously incomplete picture of asbestos risks because it:

With these exclusions, EPA is setting the American public up for failure of protection by allowing them to be continually exposed to deadly toxins. If EPA won’t protect us against asbestos, a known carcinogen that kills nearly 40,000 Americans every year, there is little hope they will protect us from other carcinogens.

A solution to EPA’s inaction and irresponsible behavior would be to pass the Alan Reinstein Ban Asbestos Now Act. Since EPA refuses to do the right thing, it is time for Congress to act and move this lifesaving legislation forward. Nearly 70 nations around the world have put public health before corporate profits and banned asbestos. As Americans, we deserve the same from our government.

ADAO has created the new “Failure is Imminent || EPA is Cherry-Picking Asbestos Risks to Evaluate || Leads to No Asbestos Ban video to show these EPA failures, and share the voices of all those advocating for change. Please watch below.