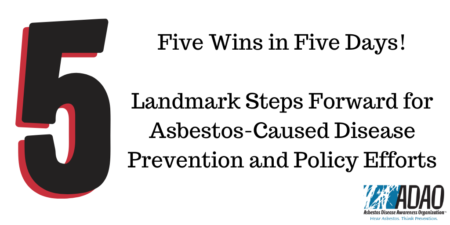 We are incredibly honored to share the news of five recent wins for the Asbestos Disease Awareness Organization (ADAO) that occurred over the course of just one week. We would like to take a quick moment to celebrate these successes, because it is incredibly important for us to recognize the hard work and dedication that went into each of these victories. We thank you, our faithful supporters, volunteers, endorsees, sponsors and leadership, for being alongside us during these moments of success. We are indebted to you and your hard work.

To start, we saw two massive legal victories. The first was on November 14, when the U.S. 9th Circuit Court of Appeals ruled that the Environmental Protection Agency (EPA) wrongly excluded legacy uses and disposal from its Toxic Substances Control Act evaluations, including for asbestos.

The EPA had stalled this measure, which is mandated by law. The court affirmed that the agency must consider the danger of legacy asbestos in buildings across America, which will help protect our children, school staff and workers around the nation.

The next day, on November 15, U.S. District Judge Edward Chen issued his opinion denying EPA’s motion to dismiss the ADAO case against the Agency in the U.S. District Court in San Francisco. ADAO sued the EPA earlier this year after it rejected ADAO’s petition to require the asbestos industry to report who is importing asbestos, where asbestos is being transported, and how asbestos is being used.

This decision allows ADAO to press ahead with our suit to hold EPA accountable for refusing to require simple and straightforward reporting by the asbestos industry. We filed the suit because we believe Americans deserve the ‘Right to Know’ which companies are importing and using deadly asbestos and where it is being put in our country. We believe EPA cannot protect public health and safety without accurate and transparent reporting from the industry that is using this deadly chemical.

Then, the bicameral Alan Reinstein Ban Asbestos Now Act of 2019 (ARBAN) (H.R. 1603) cleared a critical milestone in the U.S. House of Representatives, passing out of the Committee on Energy and Commerce with a recorded vote of 47-1.

The bill will now move to the House floor, where we expect it to pass with bipartisan support. We then look forward to ARBAN making its way through the Senate and being signed into law. This comprehensive bill will protect workers, consumers, and children from being exposed to the deadly threat of asbestos and stop hundreds of tons of asbestos from entering the United States. It is past time for the U.S. to join the nearly 70 countries that have already banned asbestos and protect our future generations from this known carcinogen.

“Every day that goes by without an asbestos ban is another day that American’s health and lives are being put at grave risk,” said Senator Jeff Merkley (D-OR) in a press release about the momentous day. “While the EPA fiddles, Americans are dying. More than 60 other nations have already recognized asbestos as the deadly substance it is, and acted to protect their citizens by banning asbestos. It’s time for us to catch up to the rest of the developed world, and end this dangerous public health threat once and for all.”

ADAO also participated in two successful events last week. On November 18, we held a collaborative event with Dr. Raja Flores, a professor and Chair of Thoracic Surgery at Mount Sinai Hospital in New York City. The event, “Asbestos: Still Legal and Lethal Today” addressed what the medical community can do to prevent asbestos-related diseases, what asbestos-related illnesses look like, and how the medical community can join the fight to ban asbestos in the United States.

Then on November 20, ADAO attended the screening and discussion of the asbestos documentary, Dirty Laundry, at the Dalla Lana School of Public Health in Toronto, Canada. Organized by Dr. Christine Oliver, it was yet another exciting “Art, Advocacy, and Academia” screening and discussion that brought together experts including Paul Demers, PhD, MSc; Ray Copes, MD, MSc; and Robert Dematteo, MA, DOHS to talk about the impact of asbestos exposure on public health. The filmmakers Conor Lewis and Zack Johnson joined the conversation.

Thank you again for all your time and commitment to banning asbestos in the United States and supporting our educational initiatives. We could not have done this without you.