Skip to content
Home/Blog/Advocacy/Legislative/From Strength to Strength. The Bicameral Alan Reinstein Ban Asbestos Now Act Moves on to the U.S. House of Representatives for a Floor Vote

From Strength to Strength. The Bicameral Alan Reinstein Ban Asbestos Now Act Moves on to the U.S. House of Representatives for a Floor Vote 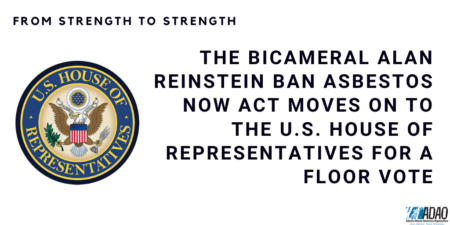 The bicameral Alan Reinstein Ban Asbestos Now Act of 2019 (ARBAN) (H.R. 1603) has cleared a critical milestone in the U.S. House of Representatives and now advances out of committee and to the House Floor for a vote. On Tuesday, November 19, the bill was approved with bipartisan support by the Committee on Energy and Commerce. The bill was passed with a recorded vote of 47-1.

From here, it will move to the House floor, where we expect it to pass with bipartisan support. We then look forward to ARBAN making its way through the Senate and being signed into law. This comprehensive bill will protect workers, consumers, and children from being exposed to the deadly threat of asbestos and stop hundreds of tons of asbestos from entering the United States. It is past time for the U.S. to join the nearly 70 countries that have banned asbestos to protect public health and future generations from this known carcinogen.

Asbestos is a known carcinogen and has no safe level of exposure. Nearly 40,000 Americans die from asbestos-related illnesses every year, including mesothelioma, lung cancer, and asbestosis. Despite this, asbestos remains legal and lethal in the United States. The U.S. is the only western industrialized nation to have not yet banned asbestos.

“It’s been more than 40 years since the Environmental Protection Agency began its work to ban asbestos, and today this Committee took a major, bipartisan step to do just that,” said Chairman Frank Pallone (D-NJ). “The Alan Reinstein Ban Asbestos Now Act finally bans the manufacture, import, processing and distribution of asbestos. I am proud that we were able to come to a bipartisan agreement to advance this bill out of Committee with overwhelming support, and look forward to bringing it to the House floor soon. It’s time we ban asbestos for good.”

“On asbestos, the Congress needed to take action. The bill is a compromise, we worked with our Democratic colleagues to vastly improve the original bill,” said Ranking Member Walden (R-OR). “Americans deserve protections from asbestos related diseases, and I hope this bill will address this threat.”

“Asbestos has been killing Americans for too long, leaving families and communities without their loved ones,” said Congresswoman Bonamici (D-OR) in a press release. “These deaths are preventable. I am grateful that the House Energy and Commerce Committee passed my bill, the Alan Reinstein Ban Asbestos Now Act, with strong bipartisan support. I thank Chairman Pallone for his leadership, and I will do all I can to make sure this lifesaving legislation is passed by the full House and signed into law.”

“We have known the dangers of asbestos for the better part of a century, but after all that time it continues to be imported and used in commerce. As a result, tens of thousands of Americans are dying every year from asbestos exposure,” shared Chairman Tonko (D-NY). “ We owe it to these victims, their families and all who are at risk of exposure to enact this legislation that will establish, at long last, a ban on asbestos use.”

“The issue of asbestos, the diseases it causes, and what should be done about it has been vexing government for many decades,” said Ranking Member Shimkus (R-IL). “Neither regulatory nor legislative actions have been able to achieve the public health protections Americans deserve. While the bill reported today by the Energy and Commerce Committee is not perfect, through tough but fair negotiations it became a bipartisan compromise worthy of support. I thank my colleagues, committee staff, as well as the activists and industry representatives who worked with us to craft a bill that can be signed into law.”

“Every day that goes by without an asbestos ban is another day that American’s health and lives are being put at grave risk,” said Senator Jeff Merkley (D-OR) in a press release about the momentous day. “While the EPA fiddles, Americans are dying. More than 60 other nations have already recognized asbestos as the deadly substance it is, and acted to protect their citizens by banning asbestos. It’s time for us to catch up to the rest of the developed world, and end this dangerous public health threat once and for all.”

“Committee members did the right thing when they voted for H.R. 1603 on Tuesday, which requires the federal government to assess risks from so-called legacy asbestos,” said Rebecca L. Reindel, AFL-CIO’s Safety and Health Director. “‘Legacy’ asbestos in our buildings does not create legacy exposures, but instead puts teachers, fire fighters, maintenance, repair, construction workers and many others at serious risk of disease and death on the job. This bill will save lives.”

“Asbestos in schools and homes disproportionately affects people of color, people with disabilities, and people with low income,” said Celeste Monforton, DrPH, MPH, Member of the American Public Health Association.  “The bill’s provision for a comprehensive assessment of the presence of asbestos in the millions of residences, schools, and workplaces is of critical importance in order to address the risk of exposure and prevent asbestos-related disease.”

No other asbestos ban bill that has moved this far in the House towards passage with bipartisan backing.  ADAO sincerely thanks Committee for their hard work and commitment to advance ARBAN on a bipartisan basis.  We will continue to work with Congress to ban asbestos in America to protect public health from this deadly threat. The successful markup follows two successful legal battles against the EPA last week. We are gaining momentum, and we only plan to keep going.

Together, we will make change possible.