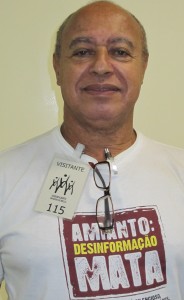 Treatment: Public health provided from the government of Brazil

Geraldo was 19 years old in 1961 when he began working with 300 other employees at an Eternit asbestos plant in Brazil.  Over the next 6 years and 10 months as an asbestos cement mixer at Eternit, Geraldo emptied large bags of asbestos into a cement mixer on a daily basis, often inhaling or consuming the large billows of unsettled asbestos dust that rose from the cement mixer.  The workers wore regular uniforms with no special protection expect for gloves.  It was only in 1967 that Eternit officials gave the workers paper masks as a precaution; however, Geraldo remembers that, when he removed his mask, he could see the inside of it still covered in white dust.  He also remembers that the workers left the plant with clothes covered in white asbestos dust that they brought home for their family members to wash, likely exposing them to the deadly fibers as well.

Geraldo expressed concern to his supervisors about the asbestos exposure and asked to be transferred within Eternit to a different department.  He was denied.  Other workers, too, were concerned about exposure and eventually started to become ill.  When they asked their bosses if they could leave, Eternit officials denied that asbestos exposure had anything to do with their illnesses.

Unfortunately, one of the challenges those affected by asbestos faced at the time was that they needed the testimony of workers in order to file a report against Eternit.  However, he says Eternit bribed and pressured these workers to keep quiet in order to thwart such efforts against the company.  The company also did its best to settle with workers out of court before they could pursue legal compensation for their illnesses.  Faced with impending death from their illnesses or the option of an often years-long legal battle for restitution, many workers settled with the company for only a small amount of money.  An attorney also present at the meeting said he had seen compensation when fully pursued in court of up to about US $500,000.

Ultimately, Geraldo left Eternit in 1969.  After experiencing symptoms of illness, he finally went for a chest X-ray in 2002 and was diagnosed with asbestosis and pleural plaques.  Like many of his peers, he eventually settled with Eternit rather that pursue compensation in court.  As compensation for his asbestos exposure and resulting health issues, Geraldo received 10 years of free medical care by Eternit in his settlement and the equivalent of US $3,000.

Today, Geraldo says that, of all of his fellow workers, only about 10% are still alive today.  The other 90% have passed away from similar asbestos-related diseases.  Geraldo is now active in the social movement against the asbestos industry in Brazil and continues to learn from the information and collaborations of individuals and organizations with him in the battle.  When we spoke with him at Fiocruz, Geraldo said, “In this fight

[against the asbestos industry], we learned a lot. And we weren’t alone. We were with researchers, community members, and very important people. We were with Brazilians, but also with many foreigners who also joined our fight. Every day, we’re learning more with all of you.”