Each year, the Asbestos Disease Awareness Organization (ADAO) dedicates April 1-7 to increasing awareness of asbestos and preventing exposure by bringing together experts and victims from around the world to share, learn, and take action.To view all 7 days of Global Asbestos Awareness Week (GAAW) content, please click here. Also, be sure to follow the conversation on social media with our GAAW hashtag: #2019GAAW. 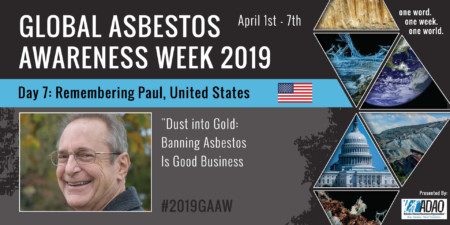 Today, we are remember Paul, a Mesothelioma Warrior from the U.S. who tragically lost his battle with mesothelioma just a few short months ago, and for the countless other victims who have been silenced by asbestos. Paul was a remarkable friend and brave Warrior, who for more than a decade valiantly used his voice to fight for an asbestos ban and civil justice.

Tonight, the ADAO community will gather for a virtual candlelight vigil, both to honor the warriors fighting asbestos diseases and remember those we have lost. We light these candles with heavy hearts, but also with hope for a brighter future without asbestos.

In addition to Paul’s story, we are also highlighting the work of the AFL-CIO, one of the strongest labor unions in the world, and Hazards Campaign Workers’ Memorial Day which takes place April 28, 2019.

The AFL-CIO said, “On April 28, the unions of the AFL-CIO observe Workers’ Memorial Day to remember those who have suffered and died on the job and to renew the fight for safe jobs. It is a day where working people come together to call for action on hazards that cause unnecessary injury, illness and death. We will stand united against the ongoing attacks on workers’ rights and protections and demand that elected officials put workers’ well-being above corporate interests.”

The Hazards Campaign has produced a variety of Workers’ Memorial Day resources to support unions and activists with their April 28 event planning including stickers, posters, purple ribbons, high-visibility WMD jackets, and a new poster for #IWMD19.

Global Asbestos Awareness Week is a reminder each year of how important education is in the effort to prevent asbestos exposure, disease, and death. You can make a difference. Take action by connecting with ADAO on Facebook and sharing all #2019GAAW content with your social network.

Thank you to everyone for their participation in this year’s Global Asbestos Awareness Week! We are deeply grateful for the support of our contributors and those who joined the GAAW conversation around the world. An asbestos ban is on the horizon. Until then, prevention is our best tool to protect our international community.

Special thanks to PBS NewsHour for their excellent segment: “The stunning truth about asbestos use in the U.S.” by Miles O’Brien, which includes Paul’s powerful story.

Remember to follow the online conversation by using #2019GAAW and #IWMD19.