Each year, the Asbestos Disease Awareness Organization (ADAO) dedicates April 1-7 to increasing awareness of asbestos and preventing exposure by bringing together experts and victims from around the world to share, learn, and take action. To view all 7 days of Global Asbestos Awareness Week (GAAW) content, please click here. Also, be sure to follow the conversation on social media with our GAAW hashtag: #2019GAAW.

Asbestos is a known carcinogen and there is no safe level of exposure. Throughout the 19th century, this mineral was widely used in construction, shipbuilding, and the automotive industry. Without a ban, asbestos remains legal and lethal in nearly 70% of countries around the world, including the United States. 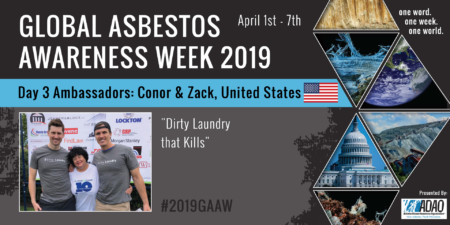 Today we’re featuring Conor Lewis and Zack Johnson, directors of the 2018 documentary Dirty Laundry, who are using their filmmaking talents to bring new audiences into the asbestos conversation. The film highlights the cousins’ 4,200-mile bike ride across the United States to honor their grandmother, who lost her life to mesothelioma. It was named an official 2018 selection for the San Luis Obispo International Film Festival.

ADAO has been using art to drive our advocacy since our founding in 2004. Storytelling is at the heart of the work ADAO does, helping us to translate the experiences of victims and expertise of scholars alike  into more accessible forms that help them be seen, felt, heard, and remembered. We’ve experimented with myriad art forms to deliver our message, from film to music and everything in between. In the digital era, graphic design has become invaluable to our messaging efforts.

Over the years, we have been fortunate to partner with some phenomenal artists who use their talents to spread a worthy cause.

Earl Dotter has created an ever-evolving photo exhibit, BADGES, memorializing the asbestos workers of the 20th century and honoring the legacy of famed asbestos treatment pioneer, Dr. Irving J. Selikoff. Earl’s traveling exhibit presents the photo ID badges worn by the countless workers who were exposed to asbestos in mining, manufacturing and product use. These ID badges unabashedly name the companies that harmed these people. This year, ADAO is featuring Earl’s 5th BADGES poster, which shows a coalition of people fighting for asbestos reform on Capitol Hill, including asbestos ban experts, allied organizations, and asbestos victims like Mike and Jessica Mattmuller. The theme of this year’s exhibit is “Progress and Challenges from the Frontlines.”

Daniel Pineda González, leader of the #ColombiaSinAsbesto movement and the IZE Foundation and producer of the 2018 documentary Inextinguishable has become another invaluable partner in recent years. This film, directed by Felipe Rico Atara, follows the experiences of  Daniel’s wife Ana Cecilia Niño Robles, whose mesothelioma diagnosis captured the attention of their native Colombia. The documentary describes the human capacity to transform pain into love, indignation into action, and the importance of citizen unity when it comes to generating changes that benefit us all.

Firdaus Kaharas, also known as “The Animated Activist,” is a world-renowned director and humanitarian. His projects — which include  animation, documentaries, films and television series — are designed to educate, entertain, and change societal and individual behavior via a process he calls “Culture Shift.” In 2017, Firdaus and ADAO teamed up to create a family-centric asbestos awareness PSA video in six languages. This art-based PSA campaign continues to bring our message about the dangers of asbestos to thousands around the globe. Each daily GAAW blog features one of these fantastic videos — please be sure to check them out and share with your family and friends.

Daniel Lambo is a Belgian director whose films center on human rights, social inequality, and poverty. His first feature film, Miss Homeless (2010), is a  docu-fiction about homeless people in Brussels. It premiered in twelve different countries on the International Day for the Eradication of Poverty. Dry Branches of Iran (2012) deals with censorship during Iran’s Green Revolution, and De Figurant (2016) takes on racial stereotypes with a story about a drug dealer who has acting ambitions. In his latest feature, the documentary Breathless, Lambo investigates the delocalization of the asbestos industry to developing countries.

Natasha Luckhardt is the producer of Widows of Asbestos, an upcoming documentary focused on the widows of workers who have lost their lives to asbestos-caused cancer in Peterborough, Canada. Focusing on these victims’  occupational exposure at General Electric, Luckhardt aims to dispel the myth that asbestos is a problem of the past. Hers is an important voice in the ongoing workplace safety movement in Canada.

Barbara McQueen, writer, model and photographer, is the author of Steve McQueen: The Last Mile, which she wrote about her relationship with the late film star, who died of asbestos-linked disease. Documenting the three-and-a-half years they spent together, the book  includes candid photographs from 1977 to 1980. McQueen has hosted several art exhibits of her work with shows in London, Tokyo, San Francisco, Nashville, Phoenix, and Idaho.

Paolo Monico is an Italian-American filmmaker who wrote, directed and produced the short film The Mother, which addresses occupational asbestos exposure and breaks the blue-collar stereotype. The award-winning film is a love letter to the filmmaker’s father, who passed away in 2002 from mesothelioma. Paolo has partnered with ADAO to help make his film a strong platform for education around asbestos-related diseases.

Jordan Zevon is a musician and the son of Grammy-winning singer songwriter Warren Zevon. He produced his father’s final album, The Wind, which examined the late singer’s battle with mesothelioma. Warren’s song from that album, entitled “Keep Me In Your Heart,” has become an anthem of our Mesothelioma Warrior community and continues to bring comfort and understanding to those touched by asbestos diseases.

This year, one day before we kick off ADAO’s 15th Annual International Asbestos Awareness and Prevention Conference, we will be hosting a special Global Asbestos Awareness Week event. To emphasize the power of art in advocacy, ADAO will be  screening the documentary Breathless at George Washington University on April 4, 2019 from 6:00 – 9:00 pm ET. A panel discussion will follow the film, to discuss the social and legal impact of asbestos and the industry responsible for it, as well as answer questions from the audience. Included on the panel are the film’s director, Daniel Lambo; Dr. David Michaels, Professor of Environmental and Occupational Health at George Washington University; Gopal Krishna, co-founder of the Ban Asbestos Network of India; Robert Sussman, former Senior Policy Counsel to the EPA Administrator; and myself.

When we partner for prevention and get creative, we make change happen!

Special thanks to our 2019 Platinum Sponsor Simmons Hanly Conroy LLC.