Skip to content
Home/Blog/Global Asbestos Awareness Week April 1 – 7 — Day TWO: Champions of Change in Washington, D.C. and Around the World 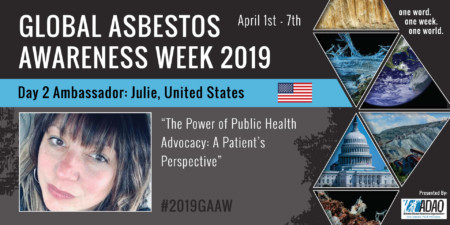 Each year, the Asbestos Disease Awareness Organization (ADAO) dedicates April 1-7 to increasing awareness of asbestos and preventing exposure by bringing together experts and victims from around the world to share, learn, and take action. To view all 7 days of Global Asbestos Awareness Week (GAAW) content, please click here. Also, be sure to follow the conversation on social media with our GAAW hashtag: #2019GAAW.

Today, we’re highlighting the lawmakers and fellow advocacy groups who work day in and day out to eliminate asbestos-caused diseases worldwide. These “Champions of Change” in Washington, DC, and around the world are instrumental in the global struggle to ban asbestos, whether it be by passing legislation, caring for victims of asbestos-linked disease, or working to educate the public about this carcinogen. Today will also feature the story of Day Two Ambassador: Julie Gundlach.

Without a ban, asbestos remains legal and lethal in nearly 70% of countries around the world, including the United States. This year, however, ADAO experienced momentous legislative progress. The Alan Reinstein Ban Asbestos Now Act (ARBAN) of 2019 was introduced in both chambers of Congress by Sen. Jeff Merkley (D-OR), Rep. Suzanne Bonamici (D-OR), Rep. Elissa Slotkin (D-MI), and Chairman of the House Energy and Commerce Committee, Rep. Frank Pallone (D-NJ). Along with these four dedicated champions, there are more than 40 incredible cosponsors and powerful endorsees.

It took years of legislative advocacy with a lot of champions working together to get us to this point.

We would also like to extend our sincerest congratulations to Canada for banning asbestos late last year and setting an example for the rest of the world. We hope to soon follow in the footsteps of those who are able to recognize the threats and dangers of asbestos and ban this lethal carcinogen.

Please join ADAO in thanking these many named and unnamed Champions of Change. We are excited to collaborate and achieve greater, higher milestones with them at ADAO’s 15th International Asbestos Awareness and Prevention Conference.

Special thanks to our 2019 Platinum Sponsor Motley Rice LLC.