Asbestos is a known carcinogen and there is no safe level of exposure. Since the 19th century, asbestos was widely used in construction, shipbuilding, and the automotive industry. Without a ban, asbestos remains legal and lethal in the USA and nearly 70% of the world today.

Today, we will be highlighting the 2016 Senate Resolution declaring Global Asbestos Awareness Week, and featuring my late husband, Alan’s Story, “I’ll Do Anything to Fight Mesothelioma to Have More Time with My Family, Anything”. 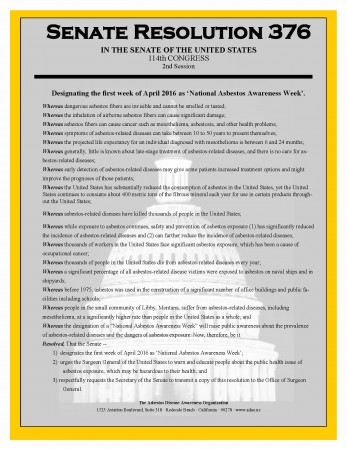 Since founding the Asbestos Disease Awareness Organization (ADAO) in 2004, we have worked with the U.S.  Senate to unanimously pass 12 Asbestos Awareness Week Resolutions and secure four U.S. Surgeon General asbestos warnings, in an effort to prevent exposure to eliminate deadly asbestos-caused diseases.

While promising research continues, prevention remains the only cure. Each day, an estimated 3o0 people die from asbestos-caused diseases.  It is unconscionable, for example, that last year Russia, China, Brazil, and Kazakhstan mined 2 million metric tons of asbestos to be primarily used in asbestos-cement products.  Millions of tons of asbestos remain in U.S. homes, schools, and workplaces. ADAO joins the global community in calling for a ban in the United States and around the world.

As stated by the U.S. Surgeon General  in the 2015 statement, “National Asbestos Awareness Week is April 1-7 – a good time to remind Americans about the health dangers of asbestos exposure. Asbestos, a natural mineral fiber that is found in rock and soil, was widely used as insulation and fireproofing material in homes, commercial buildings, ships and other products, such as paints and car brakes. In recent years, asbestos use has decreased dramatically after it was linked to illnesses, including lung cancer, mesothelioma, and asbestosis…Because of its use in so many products, asbestos is still of special concern for anyone who works in construction – or who might be in a position to disturb asbestos found in older homes, buildings or equipment. The danger comes from inhaling the tiny fibers or dust released into the air once asbestos has been disturbed or damaged.”

It is exciting to see the international community unite and collaborate for Global Asbestos Awareness Week.

Special thanks to our 2016 Platinum Sponsor, Simmons Hanly Conroy, LLC

To learn more about asbestos and asbestos-related diseases, please visit:

To learn more about Health Housing and the Strategy for Action, please visit: