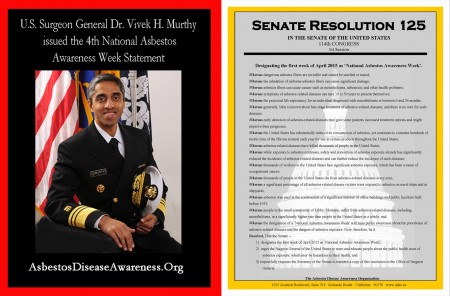 This day of Global Asbestos Awareness Week is dedicated to Michael, a 29-year-old mesothelioma warrior from the U.S. who lost his courageous battle in 2014.  Click here to read his story, “Asbestos Has Changed My Life.”

Since ADAO’s founding in 2004, we have worked with members of the Senate to unanimously pass 11 asbestos awareness week resolutions and three official asbestos warnings, all in an effort to protect the American public from asbestos exposure and disease.  ADAO is pleased to announce that the U.S. Senate recently passed the bipartisan 11th Annual “National Asbestos Awareness Week Resolution.”  This important educational week raises public awareness about the prevalence of asbestos-related diseases and the dangers of asbestos exposure and coincides with the international educational campaign, Global Asbestos Awareness Week.

In 2014, the Asbestos Disease Awareness Organization (ADAO) applauded Acting U.S. Surgeon General Rear Admiral Boris Lushniak for issuing a statement about the dangers of asbestos.  We are thrilled to announce that today, on this day we dedicate to past and future Resolutions and Statements, the U.S. Surgeon General Vice Admiral Vivek H. Murthy issued a Statement on National Asbestos Awareness Week 2015!

As stated by the U.S. Surgeon General  in the recently released 2015 Statement, “National Asbestos Awareness Week is April 1-7 – a good time to remind Americans about the health dangers of asbestos exposure. Asbestos, a natural mineral fiber that is found in rock and soil, was widely used as insulation and fireproofing material in homes, commercial buildings, ships and other products, such as paints and car brakes. In recent years, asbestos use has decreased dramatically after it was linked to illnesses, including lung cancer, mesothelioma, and asbestosis…Because of its use in so many products, asbestos is still of special concern for anyone who works in construction – or who might be in a position to disturb asbestos found in older homes, buildings or equipment. The danger comes from inhaling the tiny fibers or dust released into the air once asbestos has been disturbed or damaged.”

Special thanks to our 2015 Platinum Sponsor, Simmons Hanly Conroy, LLC

To learn more about asbestos and asbestos-related diseases, please visit:

To learn more about Health Housing and the Strategy for Action, please visit: