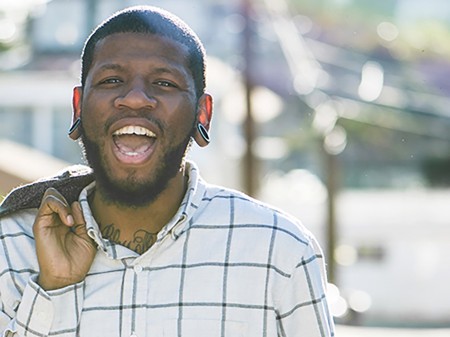 Today, we are sharing Quincy Jones’ short documentary about his upcoming HBO Special!

Meet comedian, Quincy Jones, who will fulfill his “dying wish” and tape a one-hour comedy special on April 4 at the Telegram Ballroom in Los Angeles. Quincy, age 32, has stage 4 mesothelioma.

“I am beyond excited to film my first of what I hope to be many more HBO specials. It is an honor and I am very blessed and can’t wait to see it air”, said Quincy in a recent interview.

It was just this February after we finished ADAO’s 9th Congressional Staff Briefing in Washington, DC, when a text from Jordan Zevon, ADAO National Spokesperson, lit up my phone and shared Quincy’s story.  “Call Quincy, maybe we can help him.” Jordan had seen his Kickstarter Campaign, “Comedian Dying of Cancer Hopes to Make a Stand-Up Special.”

After connecting via email, I had the pleasure of meeting and watching Quincy perform in February.  His talent runs deep, and so does his motivation to raise awareness.  As we chatted, he too was “very shocked, confused and hurt as to why” asbestos was still legal and lethal in the United States and in more than 60% of the world. Chills ran down my spine as Quincy shared the July 2015 tape-recording of his doctor telling him that he had mesothelioma.  There is nothing funny about asbestos, a known carcinogen, but I know Quincy will drive awareness to new heights.

Quincy’s Kickstarter campaign caught the attention of Ellen DeGeneres, who had him on as a guest. Unbeknownst to him, Ellen generously donation to his campaign, and also worked her magic with HBO and inked a special taping.  In just a few weeks, Quincy’s Kickstarter campaign nearly quadrupled the fundraising goal. Quincy has raised more than just funds for his comedy special; he has raised asbestos and mesothelioma awareness.

Quincy notes, “I’m honored to even have a day in this amazing informative week… I say go get informed and write to your politicians and ask why are we still using this deadly material?”

Special thanks to our 2016 Platinum Sponsor, Motley Rice LLC