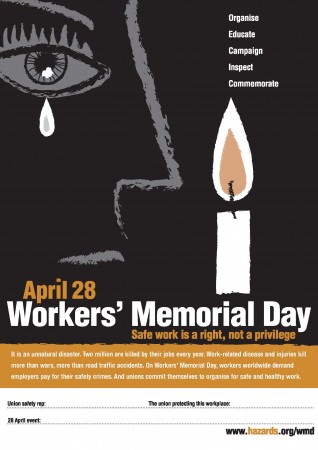 This day of Global Asbestos Awareness Week is dedicated to Janelle, a mesothelioma warrior in the U.S. who lost her courageous battle in June 2013.  Click here to read her story, “I Will Never Be the Same Again.”

“The slogan “Pray for the dead, and fight like hell for the living” will be on display later this month on posters and t-shirts as people commemorate International Workers’ Memorial Day.  Each year, April 28 is set aside to recognize the heavy toll that preventable work-related deaths take on families, co-workers and communities. People in at least 50 countries will gather to remember that workplace hazards – from dangerous machinery to toxic chemicals – cut lives short. They will be calling on governments, industries and each other to demand safe workplaces.

In 2014, about 2.3 million individuals died from work-related causes. The number includes 11 construction workers in Chennai, India who died when a warehouse collapsed, four workers from Kosovo who were killed in an explosion at a power plant, and a 17-year old worker at a junkyard in Texas, USA who was fatally struck by a forklift.  Some of the incidents are covered by news outlets, such as the 301 coal miners who died on-the-job last May in Manisa, Turkey. Most occupational fatalities, however, don’t make the headlines. About 86% of them are caused by work-related illnesses, including cancers, silicosis, black lung, and infectious diseases. Certainly, a large portion of the deaths were caused by exposure to asbestos – exposure that occurred 20 or 30 years ago.  To save lives in the future, strong action is needed today to address exposure to this deadly mineral.

Some of us will mark Workers’ Memorial Day by lighting candles with a few co-workers. Others will r

ally with hundreds and call out the names of those killed last year by workplace hazards.  We will remember those who were fatally injured, as well as the many who succumb to asbestosis, mesothelioma and other work-related diseases.  No matter the size or place of the event, we will be together in spirit to remember the dead.  I urge you to recommit to “fight like hell for the living” by supporting a global ban on asbestos.”

Special thanks to our 2015 Platinum Sponsor, Motley Rice LLC