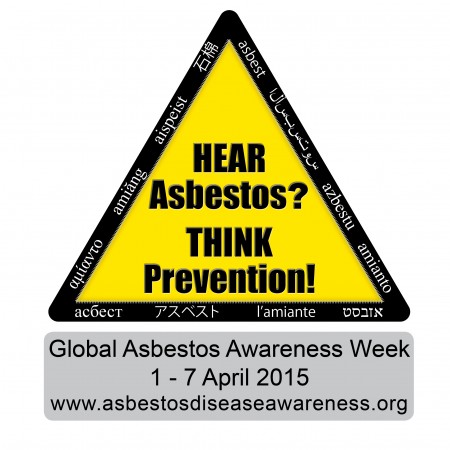 This day of Global Asbestos Awareness Week is dedicated to Joe’s story, “How Many Deaths Will It Take?“

“First and foremost, education is critical in preventing asbestos exposure.  Do you know where asbestos could be in your home? Your office? Your kids’ school?  Asbestos has been banned in 55 countries, but not in the U.S. or all of Brazil.  Even countries that have banned asbestos may still have asbestos present in buildings and consumer products.  Take control of your health and safety.

The battle to ban asbestos is a global one, and there has been some progress in recent decades.  For example, the Rotterdam Convention is approaching in May.  The text adopted at this multinational conference promotes shared responsibilities related to importing and exporting hazardous chemicals, including asbestos.  It also encourages open information exchange to protect the public.  I am very pleased to see how many countries have signed on over the years and it is certainly a step in the right direction.

I also suggest that everyone take advantage of the resources available in their respective countries.  For those in Brazil, leverage Abrea Associação Brasileira dos Expostos Ao Amianto (ABREA).  ABREA was initially constituted in 1995 by the ex-workers of Eternit from Osasco to give visibility to the problems resulting from asbestos locally and nationally; to carry through medical examinations in the asbestos-exposed people (former workers and their families); to consider actions for indemnification/compensation for the victims; to inform the population and consumers on the risks of asbestos and its harmful substitutes to public health; and to fight for the banishment of asbestos in all of the Brazilian territory, as already occurs in more than 50 countries around the world.

Of course, asbestos is a problem around the world, and victims and advocates can benefit significantly from sharing their knowledge and experiences.  As such, in partnership with the Asbestos Disease Awareness Organization (ADAO), we launched the Global Ban Asbestos Network (GBAN), a virtual portal established to promote and facilitate collaboration, communication, and action internationally.  Check out the website to learn about efforts around the world!

I hope that you can share this information with your family, friends, and coworkers.  Protect yourself, connect with victims and advocates, and take action!”