Skip to content
Home/Blog/Global Asbestos Awareness Week: April 6 Remember the Dead and Fight Like Hell for the Living

Global Asbestos Awareness Week: April 6 Remember the Dead and Fight Like Hell for the Living

Today, we are sharing Tony Medina’s Story, “The Devastating Consequences of Asbestos“ (Australia) and Simon Pickvance’s Story “This Man Knows All About Cancer” (United Kingdom).

In addition to these stories, we are also highlighting the APHEDA, Hazards Magazine , and APHA, all of whom are doing incredible work to raise awareness about asbestos exposure on a global level.

APHEDA: ASBESTOS: Not here. Not Anywhere. 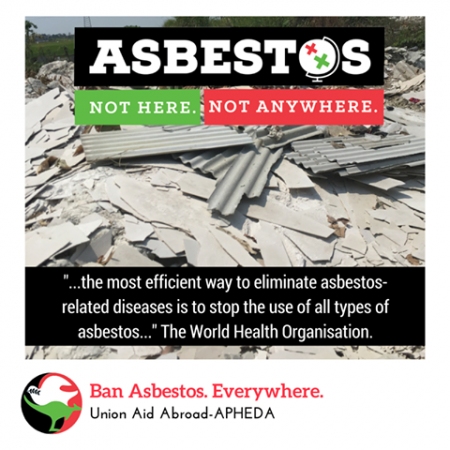 “We know asbestos kills. In some countries asbestos is still mined, manufactured and used. Everyday thousands of people are still exposed to deadly asbestos.

While some people profit, other people die. The World Health Organisation says the most efficient way to eliminate asbestos-related diseases is to stop the use of all types of asbestos.

As long as Asbestos is being used anywhere, it remains a risk, everywhere.

Union Aid Abroad-APHEDA – the global justice organisation of the Australian Union movement is building a movement of people in Australia to join with movements of people in countries in South East Asia in their efforts to see asbestos banned and eradicated.”

For more information and to get active and involved visit www.apheda.org.au/asbestos 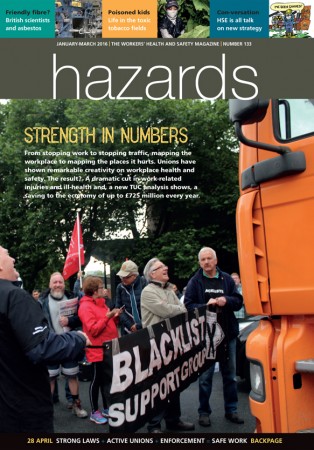 “On International Workers Memorial Day, 28 April, in the UK every year since the early 1990s, we ‘Remember the Dead’ and ‘Fight for the Living’ in remembrance events and by publicising how and why workers are killed at or by work and what must be done to stop this carnage.

Workers don’t die in tragic accidents or of rare illnesses, they die because their employer didn’t care enough for their lives and health, and government’s let them get away with.

In the UK over 1,000 people are killed in work-related incidents and up to 50,000 from work illnesses each year.  At least 5,000 people died due to past exposure to asbestos.

Almost all these deaths at and by work, could have, and should have, been prevented.

We know what works to keep workers’ safe and unharmed at work: strong laws, strictly enforced, with unions organising to represent workers.

But over the last 6 years UK and other neolioberal governments worldwide have relentlessly attacked health and safety laws and their enforcement in a deregulatory ‘cut red tape’ binge, based on the lie that it is a ‘burden on business’ and we can’t afford it.  Now they attack trade unions and safety in the Trade Union Bill that would cut safety reps time to do their jobs despite fact that over 27 million days are lost each year due to work injuries and illness compared to 800,000 from strikes.

On #IWMD16 workers, trade unionists and Hazards Campaigners in the UK will stand in solidarity with others all over the world to demand an end to preventable workplace deaths.

We especially stand in solidarity with ADAO and all asbestos sufferers and activists, to demand an end to asbestos exposure everywhere, for all workers and consumers, in the name of our comrade and friend Simon Pickvance who died of Mesothelioma.”

For the international resources visit www.28april.org and www.facebook.com/groups/170025585213

The slogan “Pray for the dead, and fight like hell for the living” will be on display later this month on posters and t-shirts as people commemorate International Workers’ Memorial Day.  Each year, April 28 is set aside to recognize the heavy toll that preventable work-related deaths take on families, co-workers and communities. People in at least 50 countries will gather to remember that workplace hazards – from dangerous machinery to toxic chemicals – cut lives short. They will be calling on governments, industries and each other to demand safe workplaces.

In 2014, about 2.3 million individuals died from work-related causes. The number includes 11 construction workers in Chennai, India who died when a warehouse collapsed, four workers from Kosovo who were killed in an explosion at a power plant, and a 17-year old worker at a junkyard in Texas, USA who was fatally struck by a forklift.  Some of the incidents are covered by news outlets, such as the 301 coal miners who died on-the-job last May in Manisa, Turkey. Most occupational fatalities, however, don’t make the headlines. About 86% of them are caused by work-related illnesses, including cancers, silicosis, black lung, and infectious diseases. Certainly, a large portion of the deaths were caused by exposure to asbestos – exposure that occurred 20 or 30 years ago.  To save lives in the future, strong action is needed today to address exposure to this deadly mineral.

We need jail time for employers who violate OSHA’s asbestos standard. In a recent case, three companies were caught by OSHA exposing an entire crew of employees to asbestos during a renovation project at a former elementary school in Okawville, Illinois. The workers were not told the construction material contained asbestos. Had OSHA not received a complaint about the work site, these workers would likely never had learned they were being exposed to deadly dust.

As we join together during Global Asbestos Awareness Week on Day Six, there are many documents, policy statements, and resolutions that can be used to raise awareness. Please reference the 2009 APHA Elimination of Asbestos Policy Statement by clicking here.