Michael, a 29-year-old Mesothelioma Warrior from the U.S., sadly lost his courageous battle in 2014. His passion and hope inspire us to continue the fight to increase asbestos awareness to protect all the “Michaels” in our world. We also light a candle and share Mike’s Story “The Opportunity to Grow as a Person” 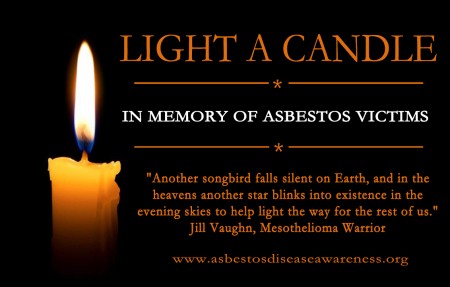 Our ADAO community will gather today for a virtual candlelight vigil to honor the warriors fighting asbestos disease and remember those we have lost. Click here to light an online candle which burns brightly for 48 hours. We light these candles with heavy hearts, but also with hope for a brighter future without asbestos.

Global Asbestos Awareness Week is a reminder each year of the importance of education in order to prevent asbestos exposure, disease, and death. You can make a difference. Take action by connecting with ADAO on Facebook and sharing GAAW’s content with your social network.  This week’s blogs, infographics such as Asbestos: Legal and Lethal in the USA, and ADAO’s educational resources can easily be shared with friends and family – and may save lives!

Thank you to everyone for their participation in this year’s Global Asbestos Awareness Week!  We are deeply grateful for the support of our contributors and those who joined the GAAW conversation around the world. Together, we will ban asbestos.  Until then, prevention is our best tool to protect our international community.

ADAO will continue this action that began on March 10, 2014 which has nearly 800 “Global Asbestos Awareness Week Declaration for a Worldwide Asbestos Ban” signatures.  ADAO will publish the updated list of signatories on April 7, 2016.

Whereas Global Asbestos Awareness Week, April 1-7, has been designated as a week to raise awareness about the dangers of asbestos and to ban asbestos;

Whereas no safe minimum level of exposure has been identified for any type of asbestos;

Whereas asbestos-related diseases can take 10 to 50 years to present themselves;

Whereas the usual expected survival time for those diagnosed with mesothelioma is between 6 and 24 months;

Whereas workers’ family and community members are also at risk of disease from asbestos fibers brought into their homes or otherwise released into the environment;

Whereas the former U.S. Surgeon General Dr. Regina Benjamin stated, “Anyone who disturbs asbestos is at risk”;

Whereas the World Health Organization states, “More than 107,000 people die each year from asbestos-related lung cancer, mesothelioma and asbestosis resulting from occupational exposures” – which translates into around 300 people each day from preventable asbestos-caused diseases;

Whereas the World Health Organization states, “125 million people in the world are exposed to asbestos at the workplace”;

Whereas the World Health Organization states, “One in every three deaths from occupational cancer is estimated to be caused by asbestos”;

Whereas the United States stopped mining asbestos in 2002 and Canada stopped in 2011, but neither country has banned asbestos;

Whereas in 2014, Russia, China, Brazil, and Kazakhstan were the largest asbestos producers in the world;

Whereas a global network of lobby groups have spent nearly $100 million since the mid-1980s to preserve the international asbestos market;

Whereas over 90% of the world production of chrysotile asbestos is used in the manufacture of asbestos-cement, in the form of pipes, sheets and shingles;

Whereas there are numerous proven substitutes for asbestos products;

Whereas the U.S. Toxic Substances Control Act of 1976 has failed to ban asbestos;

Therefore be it urgently resolved that we, the signatories of the Global Asbestos Awareness Week Declaration for a Worldwide Asbestos Ban, support the World Health Organization (WHO), in collaboration with the International Labour Organization and with other intergovernmental organizations and civil society to work towards elimination of asbestos-related diseases, in the following WHO strategic directions: