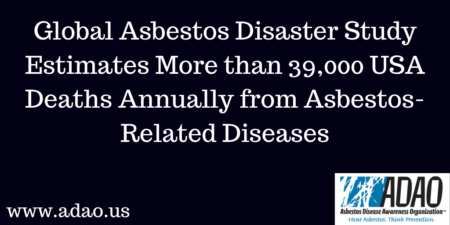 For more than a century, asbestos exposure has been known to cause deadly diseases. The Agency for Toxic Substances and Disease Registry (ATSDR) states, “Asbestos is a commercial and legal term referring to a class of minerals that naturally form long, thin, very strong fibers. Asbestos has been mined and used in many products worldwide, mostly during the 20th century. In the United States, mining asbestos has ended, but asbestos is still present in older homes and buildings and some products still contain it. Asbestos occurs in the environment, both natural and from the breakdown or disposal of old asbestos products.”

According to the World Health Organization (WHO) in 2004, “All types of asbestos cause lung cancer, mesothelioma, cancer of the larynx and ovary, and asbestosis (fibrosis of the lungs). Exposure to asbestos occurs through inhalation of fibers in the air, in the working environment, ambient air in the vicinity of point sources such as factories handling asbestos, or indoor air in housing and buildings containing friable (crumbly) asbestos materials.”

In 2015, the  Environmental Working Group (EWG) published the article “Asbestos Kills 12,000-15,000 people per year in the U.S.” Using the Center for Disease Control and Prevention’s (CDC) Wonder Database, and looking at mesothelioma, asbestosis, and lung cancer (at a 1:4 mesothelioma: lung cancer ratio), they estimated that 12,000 to 15,000 Americans die each year from asbestos-related diseases. Despite a significant reduction in asbestos use in the 1980s, the number of annual deaths remained steady for more than a decade because asbestos-induced diseases do not affect victims for decades after exposure. Using the CDC Wonder Database, from 1999 to 2013, the number of deaths from mesothelioma, asbestosis, and lung cancer from asbestos exposure is 189,000 to 221,000, or 12,000 to 15,000 deaths a year, according to EWG’s analysis. The ratio of 1 mesothelioma death to 4 lung cancer deaths was used from an article published by McCormack and colleagues in 2012. The article acknowledges several limitations that cause EWG to believe this mortality estimation is conservative, including lack of proper exposure histories, misdiagnoses, etc. Many asbestos-related deaths are not properly reported. Some patients are unaware of their previous asbestos exposure, while others are not properly diagnosed. That estimate of annual asbestos-related deaths in the U.S. does not include deaths caused by other cancers, including laryngeal and ovarian, as well as other asbestos-related diseases.

These staggering numbers come from the Global Burden of Disease (GBD) study, collected and analyzed by the Institute of Health Metrics and Evaluation (IHME), an independent population health research center at UW Medicine, part of the University of Washington. IHME provides rigorous and comparable measurement of the world’s most important health problems and evaluates strategies used to address them and makes this information freely available so that policymakers have the evidence they need to make informed decisions about how to allocate resources to best improve population health.

The Global Burden of Disease (GBD) study measures the toll of early death and disability caused by more than 300 diseases and injuries. The study produces estimates of life expectancy, causes of death, and nonfatal health loss for the US as a whole and for all 50 states and the District of Columbia. Results are available by age group and sex for each cause of death, disability, and many risk factors from 1990 to the present. Within GBD, the GBD Results Tool was used to find the data for yearly asbestos-related disease deaths.

The century old science is abundantly clear.  Asbestos is a human carcinogen and there is no safe or controlled use.