Kaitlyn Brown is a Junior at Alfred State College. I had the pleasure of meeting her at the 26th Annual PACNY Conference.  Deeply moved by Kaitlyn’s passion for health and safety, I asked her to guest blog.  Please read and share her blog, as she brings information to students with her asbestos educational outreach campaign.  She is currently an intern for PACNY, Professional Abatement Contracts of New York, and has organized an outreach program to bridge the gap between the classroom of the construction management students and the job site that they will be working on.  Kaitlyn, thank you for being a bright star in my world.  ~Linda Reinstein. 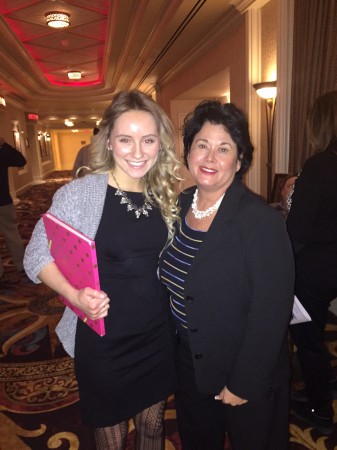 The definition for asbestos is a heat-resistant fibrous silicate mineral that can be woven into fabrics, and is used in fire-resistant and insulating materials such as brake linings, but is not limited to only those products. Many may have heard the term but don’t know how much harm it can cause. Asbestos is a hazardous material that is misunderstood and there isn’t enough general information given to the public, which causes much harm. Linda Reinstein is a world known advocate for asbestos and the men and women that are affected by it, I had the privilege of driving out to Verona, NY on February 26th 2015 to see Reinstein speak about the dangers of asbestos. As if Reinstein’s title to her presentation “Asbestos: The Human Cost of Inaction” wasn’t enough to make you sit straight up in your seat, Reinstein went on to discuss the true cost of asbestos and how it is taking lives.

I am a daughter of a man that has worked in not only the construction industry but particularly the abetment industry for over 20 years. Asbestos growing up was a common word that I heard often, along with respirators, Tyvek suits and negative air. When you hear the word mesothelioma or asbestoses you think “What in the world is that?” or “Make sure you call that 800 number from all of those random commercials that don’t make any sense.” Even with all those words floating through my head all those years it wasn’t until later that I realized the danger and harm that asbestos caused. As I grew up I learned more about the dangers and how the tiny little fibers can cause death.

I attend Alfred State College which is a known for its technology degrees and construction management program. After many times in the library hearing the construction management students say “we don’t have to study for the asbestos unit, it doesn’t matter” I became outraged. These young upcoming professionals of our world are shrugging off a deadly material. In order to do something about it, I decided to intern with PACNY, Professional Abatement Contractors of New York, and work on an outreach program to bridge the gap between the classroom and the jobsite.

All of this lead me to Reinstein’s presentation, I was shocked to learn that asbestos is still being imported into the United States and not only is it being imported, but asbestos is still not a banned product in the United States. Reinstein presented a chart that astounded me, New York State ranks 5th in the amount of asbestos related deaths per year. It was also disturbing to hear that our construction workers are eleven times more likely to die from an asbestos related disease, and it isn’t because there aren’t enough safety regulations or a lack of any regulations, it is because this deadly material is being swept under the rug and out of sight by the government that is aware that it is a harmful and deadly material. The most moving, but yet scary piece of material that was brought up and shown during the presentation was the three faces of beautiful young people that were taken by asbestos and it was not from working with it, but it was transmitted to them by a hug from a loved one.