Skip to content
Home/Blog, Uncategorized/Guest Blog: “The silence of asbestos” by Silvana Mossano

Guest Blog: “The silence of asbestos” by Silvana Mossano 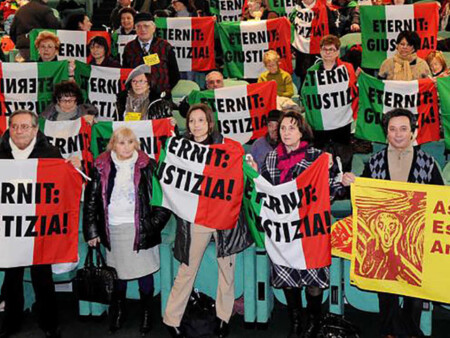 On behalf of ADAO, we stand in solidarity with the Association of Asbestos Victims Families (AFeVA), the unions, victims organizations, and the Casale Monferrato community as they continue their fight for justice in the criminal trial of asbestos billionaire Stephan Schmidheiny.  He is charged with voluntary manslaughter with intent of causing the deaths of 392 people and should be held accountable for these egregious crimes against humanity. Please follow the ‘Eternit Bis’ trial that begins on June the 9, 2021. Together, we are one. ~ Linda Reinstein

Guest Blog: “The silence of asbestos” by Silvana Mossano

The silence of asbestos

Asbestos fibres are silent in the worst sense of the word: devious, deceitful, treacherous. They enter sneakily and 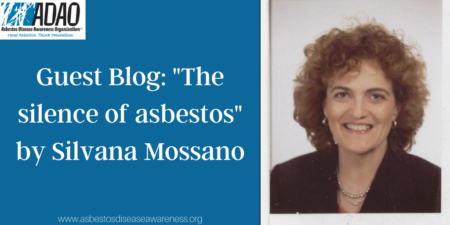 disloyally as you breathe, and although uninvited they sit in your body until they reveal themselves when bored with latency, even a very long latency, and do so with a malicious intent.

Silence also among those who have known of the dangers of this substance for decades, when the fatality rate had already been discovered. Silence: those who knew ensured that it was not known, and ensured that those who pointed out its carcinogenicity, which had already been scientifically ascertained at least since the 1960s and even earlier, were silenced.

Silence is what many – in the media, in debates, on street corners and in shops – invoke: ‘Enough talk about asbestos!’ Many invoke such silence not to listen and not to talk about something that is scary and hurts.

Silence invoked (or rather, attempted to impose) because they really do not want to talk about it, they do everything they can to turn off the spotlight that reveals responsibilities and shames – and will continue to weigh if they do not seek ethical and social redemption in repenting and compensating.

So? So we must not be silent. It is not yet time.

For almost forty years there has been no silence in the town of Casale Monferrato: there has not been silence during the various trials – held on different counts since the 1980s –  in different ways, and in different circumstances with tensions and disputes, always healed by the willingness of Casale’s community to remain united and compact, thanks to the victims’ association, Afeva, the trade unions, the local authorities and schools especially given the work of the headmasters and teachers.

Silence is what plays into the hands of those who have an interest in opposing and stifling this battle fruit of resilience, civilisation and respect, which also includes all those who have played a part in it and then had to succumb to evil.

Today there is a new important test: the ‘Eternit Bis’ trial that starts on  June the 9th and will last a long time.

Are you ready? We need you, especially the young ones.

It is not the usual chatter about a generational gap, about passing the baton. This is more than an appeal: it is a call. Please do not back out.

You prepared a banner with your message. “The message of the students of Casale Monferrato”. “We are there: with our thoughts, heart and conscience”. Don’t hold back. And don’t just be present at the so-called important moments: it is a call to heroism of punctual daily attention that I ask of you.

And so – with your determination in this essential role of sentinels and guarantors – on Wednesday, 9 June, we can start to claim, united and convinced, that justice that has not yet been met. We will not remain silent until this goal is achieved.

Then, yes, we will be able to keep silent. At last!