This week, we would like to honor the story of Jan as told through his son, Jan Jr., who is a part of our ADAO family. 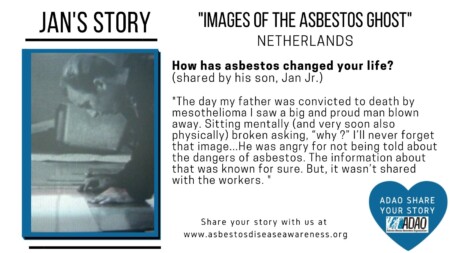 The day my father was convicted to death by mesothelioma I saw a big and proud man blewn away. Sitting mentally (and very soon also physical) broken asking, “why ?” I’ll never forget that image. He started working as a shipbuilder on a worldwide known wharf in the Netherlands when he was 14 years old, giving the best years of his life until he left the wharf when he was 30. In the mean time I was born, of course not knowing that my father has already being convicted to death by asbestos. In 1993 he had some ‘small coughing problems’ … It seemed to be the ‘pleural plaques’ on his lung-tissue. Years passed with very few physical problems. But the worst was to come in 2008. Pains in the peritoneal area, in short time being unable to eat, mentally broken, angry to almost everyone (also my caring mother!) and in the meantime the fast growing 5 tumors in the stomach area. He lost about 60 kgs of bodyweight in only 5 months. The missing of being able to see the growing up of his only two grandchildren, my two daughters, did hurt him so much that he cried at the moments he could meet them – even as sick as he felt. That image I’ll also never forget. He was angry for NOT BEING TOLD ABOUT THE DANGERS OF ASBESTOS. The information about that was known for sure. But, it wasn’t shared with the workers. One of them was my father. I connected myself with the asbestos victims by now being a part of the Comité Asbestslachtoffers in the Netherlands. I see it as my task to tell the victims and their heirs about their legal rights.