“India Through My Eyes” – Ravindra’s Story

We have been touched by asbestos in individual ways, yet we are joined together by a common bond of community. As a testament to the strength of our global family, Asbestos Disease Awareness Organization (ADAO) is highlighting the courageous stories of our members with the new “Share Your Story“ feature on our website.

This week, we would like to honor the courageous story of Ravindra (India) – especially as we are celebrating Global Asbestos Awareness Week. 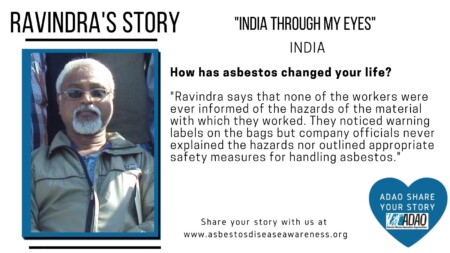 Ravindra Mohite joined Hindustan Ferrado Ltd factory in Mumbai on 20th September 1973. He started as a casual worker but worked in multiple departments over his career, including Textile, Brake Clutch Lining (BCL), Mill Board, Goods Received Section (GRS), Friction Goods Warehouse (FGW), Dispatch, Maintenance, and Compress Asbestos Fibre (CAF). He became a permanent worker in 1977 and was assigned to the textile department, where he worked on the framing machine. He got Rs 550/month (US $12.21) as salary.

Ravindra was promoted to frame operator in 1980. He cleared the exam for a temporary jobber and became a permanent jobber in the year 1992. During 1985, the plant was visited by superiors from England and a new wet process policy was initiated after the visit. The company changed its name to Hindustan Composites Ltd in the year 1993 but closed down in 2006. According to him, the company used to conduct regular medical check-ups of the workers but never disclosed any results to the workers. These tests became less regular in the late 90s.

Ravindra says that none of the workers were ever informed of the hazards of the material with which they worked. They noticed warning labels on the bags but company officials never explained the hazards nor outlined appropriate safety measures for handling asbestos. The work environment was very dusty and there were no exhaust systems in place.

It was only in 2004 – when the Occupational Health and Safety Centre (OHSC) organised a medical camp outside the company gates – that workers became aware of the real dangers of asbestos. Forty one workers of the camp were found to be suffering from Asbestos Related Disorders (ARD). One of these workers died almost immediately after diagnosis. In 2005, thirty six of these workers filed a claim for compensation under the Workmen Compensations Act of 1923. The case is still going on in the labour court, but the company flatly refuses to accept any exposure claims.

In 2004, Ravindra was diagnosed by Dr V Murlidhar with Asbestosis with 50% disability.

In 2008, after meeting barrister Krishnendu Mukherjee, workers came to know about the trust fund established by Turner and Newall (the original owner of the company). With his help, workers filed compensation claims in the trust fund. So far, 178 claims have been filed. Compensation has been received for 115 of these claims and the rest are expected very soon. Another 70 claims are being finalised for filing in the trust, which involves secondary exposure and claim for a contract worker.