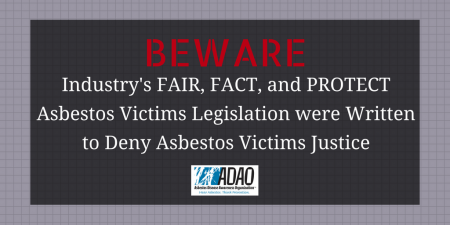 The Asbestos Industry, the U.S. Chamber of Commerce, and the American Legislative Exchange Council (ALEC), have worked together to draft and pass state and Federal legislation that denies asbestos victims their civil rights and due justice. Imports and use continue despite the fact that asbestos-caused diseases claim 15,000 American lives each year.

Let’s take a moment to talk about ALEC. ALEC is America’s largest nonpartisan, voluntary membership organization of state legislators dedicated to the principles of limited government, free markets and federalism. According to ALEC, all Americans deserve an efficient, effective and accountable government that puts the people in control. Though ALEC claims to give control to the people, it is more of a consulting firm that protects big businesses and strips individuals of their civil rights. They promote lawsuit reform. In particular, they have introduced bills yearly that make the justice process for asbestos victims drawn out and cumbersome, keeping them away from the compensation they deserve. Asbestos lawsuits are ugly enough; I hope that no one ever has to go through it. For those who have or know someone who has been involved in an asbestos lawsuit, the defendant law firms use every tool and loophole to create doubt, such as using hired white coats to undermine real scientific evidence.

When Doug Larkin and I first founded ADAO, we were thrusted into the FAIR Act debates with stakeholders — but asbestos victims didn’t have a seat at the table.  ADAO worked hard, and earned a seat for legislative discussions from ban bills to lopsided industry bills. In 2012, the first FACT ACT bills were introduced. Last year, former Representative Blake Farenthold (R-TX-27) introduced H.R.906, the 2017 FACT Act. The FACT Act is a special interest bill that forces victims to reveal personal information, work history, family information and the last four digits of their Social Security numbers in order to get medical bills paid at all. Specifically, HR 906 aimed to:

What asbestos defendants really want (and can’t currently obtain) is to make the asbestos trust claims process so onerous and so invasive for victims that the payments will be delayed or lowered, and victims will be deterred from filing claims entirely. By creating a public database of information and grinding trust claims processing to a halt, the FACT Act directly impacts asbestos victims and their families, decreasing compensation for victims, and giving defendants unfettered access to information in order to pay their victims less.

Be heard.  ADAO is asking residents in Iowa, Texas, California and North Carolina to contact their respective Senators and urge them to oppose PROTECT Asbestos Victims Act S. 2564.  Stand with the rights of victims of asbestos disease, their families and the civil rights of all Americans; please add your voice and name to this Google form. Click on the form to possibly be interviewed by the media, submit a “Letter to the Editor” or to go to Washington, D.C.

These acts are egregious affronts of our civil rights as asbestos victims, and we cannot remain silent. We must not allow these bills to pass, adding to the defendant’s bag of tricks that help them evade justice. With councils such as ALEC introducing harmful legislation and money-driven politics, it is up to us to make them listen. I implore you to share this blog and discuss the issue with your friends and family so they understand the risk posed by this legislation. If you haven’t shared your story of how asbestos has impacted your life, please consider sharing through our “Share Your Story” platform – the more stories we collect, the stronger our collective voice.

ADAO will be sure to keep you updated when there are actionable steps we can take as a community to fight back. As I often remind Congress, “For each lost from an asbestos-caused disease, a shattered family is left behind”.

Sign the petition to ban asbestos in the US NOW without any loopholes and exemptions.