Skip to content
Home/Blog/It’s Snowing Asbestos! The Haunting Truth about the “White Christmas” Killer Set and Continued Imports and Use

It’s Snowing Asbestos! The Haunting Truth about the “White Christmas” Killer Set and Continued Imports and Use

Before your Christmas playlist begins … let’s step back 50 years and remember the iconic Christmas movie, “White Christmas” starring Bing Crosby, Danny Kaye, Rosemary Clooney and Vera-Ellen. White Christmas sets the holiday scene of an idyllic snowy Christmas in America’s beautiful northeast. But what the actors and movie producers most likely didn’t know at the time was that the “snow” they were using on stage was actually a human carcinogen: Asbestos. 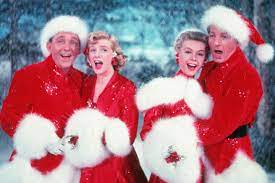 Asbestos, once considered the “Magic Mineral” for its flexible fibers that are resistant to heat, electricity, and corrosion, was highly sought after in the early twentieth century. It made for the perfect fake snow on movie sets because it was water- and fireproof, lightweight, didn’t melt, and was easy to handle. But it was far from safe. Instead, asbestos is lethal — and there is no safe level of exposure to asbestos, which causes deadly illnesses including mesothelioma and cancers of the lung, larynx, and ovaries.

Asbestos fibers are so small that they are invisible to the naked eye, which means most people do not know when they have been exposed to it. Mesothelioma, an aggressive asbestos-caused cancer, primarily attacks the lining that surrounds lungs, heart, and abdominal cavity.

On the set of White Christmas, asbestos snow was used to imitate the peaceful fall of real snow. Not widely known to be dangerous at the time, the toxic mineral was filling the lungs of all those working on the film. Outside of Hollywood, people would also use asbestos in their personal homes to flock their Christmas tree. In the 1960s, it was revealed how deadly asbestos is, but even once the asbestos industry was made aware of the health hazards of asbestos, they continued to import and use the carcinogen, risking the health and wellness of Americans everywhere. Since 1900, America has ‘consumed’ more than 31 million tons of asbestos. Even with viable alternatives as an option, the U.S. falls behind the nearly 70 countries who have banned asbestos. 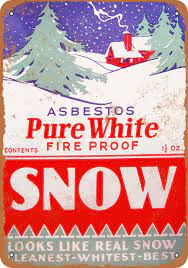 And it’s not just movie sets. Millions of homes, schools, and workplaces still contain asbestos. Similarly, the U.S. still imports hundreds of tons of it into our ports every year. As we face the reality of climate change causing more drastic weather patterns, including snowstorms and freezing sleet or rain, the average American could be exposed to asbestos during one of these natural disasters, and first responders trying to help people stay safe during storms could be exposed as well.

For those impacted by asbestos, all we want is to prevent asbestos imports and use. It is time America joined in banning asbestos from our country and protecting the public health of our citizens. Congress must act now, and pass the Alan Reinstein Ban Asbestos Now (ARBAN) Act, the most comprehensive ban bill put before Congress in over 30 years. Because of asbestos, millions of families around the U.S. spend Christmas and the holiday season missing a loved one lost to an asbestos-caused disease. Though asbestos is no longer used on Hollywood sets like it was in White Christmas, to this day, hundreds of thousands of Americans are unwillingly exposed to asbestos just going about their daily lives. We need to create a safer world for all Americans, so that we can spend Christmas and the holiday season spreading cheer, not worrying about a carcinogen that should have been banned decades ago.