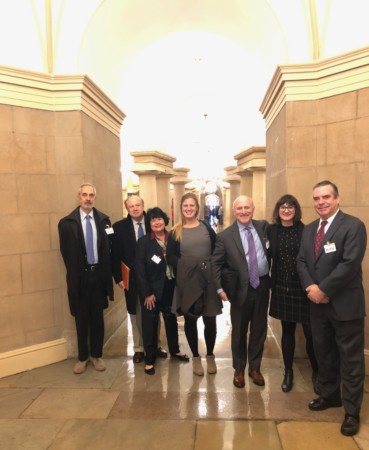 The Asbestos Disease Awareness Organization (ADAO) is thrilled to announce the release of a joint letter encouraging U.S. House of Representatives Speaker Nancy Pelosi and Majority Leader Steny Hoyer to schedule the Alan Reinstein Ban Asbestos Now Act (ARBAN) for a House Floor consideration as soon as possible. Along with ADAO, the letter is signed by 12 other environmental, worker, and public health organizations and states that the bipartisan vote of 47-1 in favor of ARBAN in the Energy and Commerce Committee on November 19 is “evidence of the compelling need to ban asbestos.”

“The bill is truly a milestone in the long fight to rid our society of asbestos, a known carcinogen that kills nearly 40,000 Americans every year. ARBAN will take long-overdue action to stop the import of hundreds of tons of raw asbestos and asbestos-containing products,” the letter says. “It will also assess ongoing exposures to asbestos installed in buildings and infrastructure decades ago that continues to threaten public health and safety. Nearly 70 countries around the globe have already taken similar actions, and the Committee vote admirably brings our country closer to finally joining them.”

ARBAN already has a large support base in the House, and we are confident that it will pass a House Floor vote with bipartisan support. We are also confident that support would be reflected in the Senate, as saving lives is something everyone from both sides of the aisle can get behind. As shown through the many signatures on the letter, ARBAN also has support from organizations around the nation that are dedicated to the health, safety, and well-being of Americans everywhere.

ADAO would like to thank all the other signers of the letter, including AFL-CIO, American Public Health Association, Brazilian Asbestos Victims Association (ABREA), Environmental Information Association, Environmental Protection Network, GO2 Foundation for Lung Cancer, International Association of Heat and Frost Insulators and Allied Workers, Mavis Nye Foundation, Occupational Knowledge International, Public Citizen, Safer Chemicals Healthy Families, and U.S. PIRG. We could not have gotten ARBAN this far through Congress without your help and support, and we appreciate your teamwork more than we can say.

Asbestos-related illnesses are entirely preventable, yet they kill nearly 40,000 Americans each year. Even though nearly 70 other countries around the world have banned asbestos, it is still legal and lethal in the United States. ARBAN would not only stop the import of hundreds of tons of raw asbestos and asbestos-containing products, but it will assess ongoing exposures to asbestos installed in buildings and infrastructure decades ago that are still hazardous to our public health and safety.

As stated in the letter, ARBAN “would accomplish several critical public health objectives:

ADAO would again like to thank the co-signers of this joint letter, and reiterate that the time to ban asbestos is now. We hope Speaker Pelosi and Majority Leader Hoyer listen to our plea and schedule ARBAN for a House Floor consideration immediately.